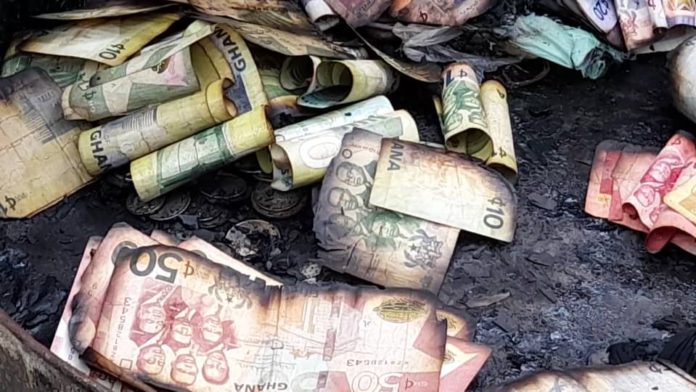 A 34-year-old businessman, Ibrahim Jawab, has lost a huge amount of money after a fire razed down a compound house with 11 rooms and and over

five stores at Aboabo near Tamale main bus stop in the Northern Region.

The Sunday dawn fire destroyed a lot of property belonging to the occupants including a huge amount of cash, provisions, clothes, foodstuff, glasses, among others.

A quick response by the Ghana National Fire Service Personnel salvaged some rooms, stores and houses around from being affected.

Adom News gathered that the fire started from an empty room with no occupant.

Some tearful fire victims, speaking to Adom News, said the fire has completely collapsed their businesses as the items in the warehouse were completely destroyed.

“As you can see, everything is burnt, these are some of few things we’re able to get, the rest are burnt and I have nothing to say, I leave everything in the hands of God, ” a victim, Mumuni Zakia, tearfully said.

One of the shop owners, Ibrahim Jawab, painfully watched on as the fire consumed his bundles of money.

The spokesperson for the Ghana National Fire Service in the Northern Region, ADOII Baba Hudu, confirming the fire at the scene, said the report got to them at 5:08am and they dispatched men to the scene.

He said, when they arrived at the scene the fire was already at developed stage so they called for assistance and two fire stations were dispatched to the scene to help bring the fire under control.

“When we got here, the fire was already at the fully developed stage considering content of the fire and the building in question so our aim was to prevent the fire from spreading to other parts of the house and then adjoining buildings within the area,” he said.

The spokesperson said investigations are ongoing.

The Northern region has already recorded more than 78 fire cases within this year.