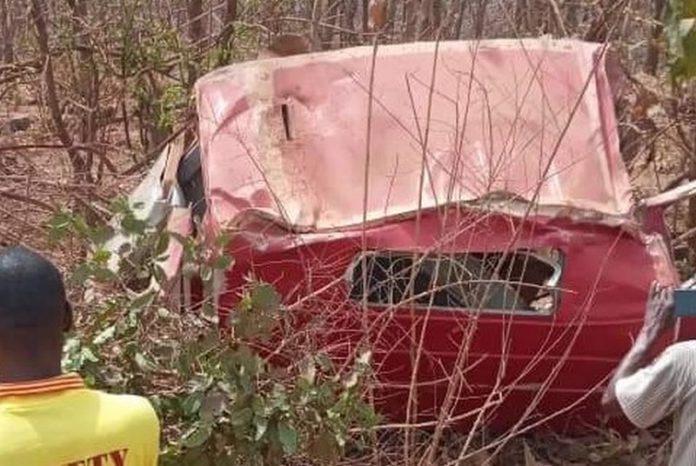 Two out of the five firefighters, who were involved in the gory accident on the Kwame Danso-Atebubu Highway, have been discharged.

In a press release dated Saturday, February 19, the Head of Public Relations of the Ghana National Fire Service (GNFS) indicated that the two were discharged on Friday, February 18, 2022.

“It will be recalled that one of the affected Officers was discharged on February 16, 2022, from the Atebubu Government Hospital, bringing to three, the number discharged so far,” Assistant Chief Fire Officer, Timothy Osafo-Affum, wrote.

On Tuesday, February 15, 2022, an accident occurred at about 10:40 am when the Kwame Danso Fire Tender was responding to a distress fire call at Atebubu with a crew of five.

The near-fatal accident occurred when a motorbike rider carelessly crossed the Fire Truck.

In an attempt to avoid hitting the motorbike rider, the fire truck lost its balance and somersaulted thrice on the highway, landing on its roof in a nearby bush.

Drivers, who chanced on the accident, helped convey the critically injured crew to the Atebubu Government Hospital but they were transferred to the 37 Military Hospital for further treatment.

Meanwhile, two of the officers are still on admission at the 37 Military Hospital receiving treatment.

Mr Osafo-Affum noted that one of the fire offers is still in intensive care, but in a stable condition.

“Management of the Service expresses its appreciation to the Command of the 37 Military Hospital, Doctors and Nurses for their support and care offered to the injured firefighters,” he added.

Qatar 2022 could be the best ever World Cup