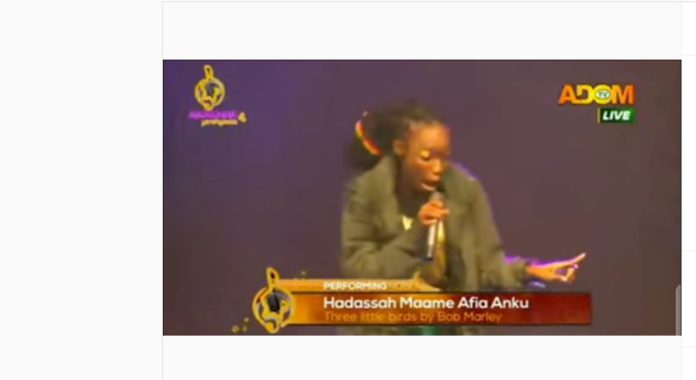 It was all about Reggae songs last Sunday as contestants performed soothing Reggae music to entertain the judges and audiences on Adom TV’s highlife music reality show for children, Nsoromma.

In spite of the awesome performances which got most of the audience dancing to the captivating tunes, the show witnessed its third eviction.

Hadassah Maame Afia Anku, couldn’t qualify to the next stage of the competition due to the inadequate votes amassed, hence got evicted after performing Bob Marley’s ‘Three Little Birds’ song.

Samuel Sam, known by the stage name, Samzik, served as the curtain-raiser for the evening performing Alpha Blandy’s Coco De Rasta in an exceptional way.

Nhyira Akoto Afriyie, on the other hand, performed Slave by Lucky Dube, and was crowned the Best Performer for the evening after a great performance and will be performing with Nsoromma season 1 finalist, Blessing Alovor, in the coming week.

Precious Mbir who performed ‘Remember Me’ by Lucky Dube won the Best Costume award after a beautiful stage performance.

Francisca Adom, wowed the audience with a stunning performance as she performed Jimmy Cliff’s ‘Born To Win’ song.

Nigeria seizes tonnes of ‘wele’ on sale as food