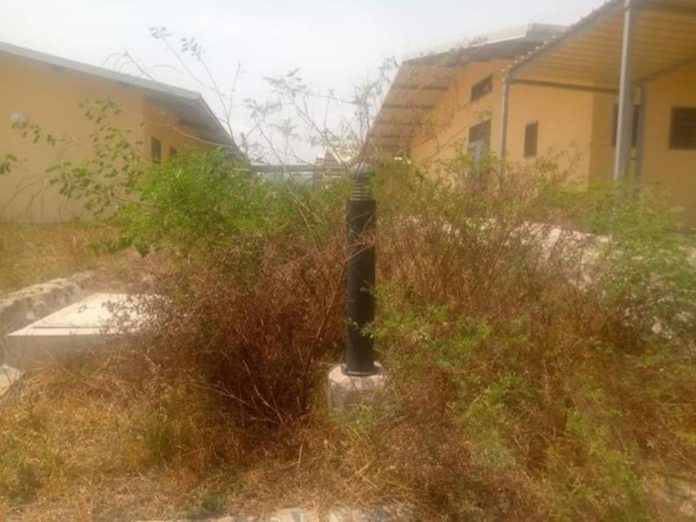 Rats and weed have taken over the newly constructed Yilo Krobo District Hospital in the Eastern Region.

The 120-bed health facility, which was completed in January 2021 and handed over to the government, is yet to be put to its intended use.

The facility, which lacks human resources, already has medical equipment, a fully furnished administration block, and a standby ambulance.

The situation, according to reports, has put pressure on existing health facilities like the Atoa Hospital in the area.

Leader of a pressure group in Yilo Krobo, Isaac Otoo, in an interview on Adom FM’s morning show, Dwaso Nsem, expressed shock at how such a facility has been left to deteriorate despite millions of dollars being sunk into it.

According to him, rodents and weed have taken over the facility while residents at Somanya and its environs struggle to access healthcare.

“People have to queue for long hours at health facilities in the area while Yilo Krobo District hospital is idle,” he fumed.

Mr Otoo bemoaned how doctors and nurses posted to the facility have to reassign to other hospitals due to lack of supporting staff.

“If we put so much money here, why should we keep it closed when our people do not have access to healthcare?” he quizzed.

Mr Otoo appealed to the government to expedite action for immediate utilisation of the newly constructed Yilo Krobo District Hospital.

For his part, the Municipal Chief Executive (MCE) of Yilo Krobo, Eric Tetteh, said plans are far advanced to put the facility to use.

He explained that the Finance Ministry is yet to give clearance to the Health Ministry to recruit 108 supporting staff to the facility.

“I have followed up on this issue and the Health Minister has assured me the hospital will soon be opened,” the Yilo Krobo MCE added.

Mr Tetteh appealed to residents of Somanya and its environs to exercise restraint as they work to make the hospital operational.