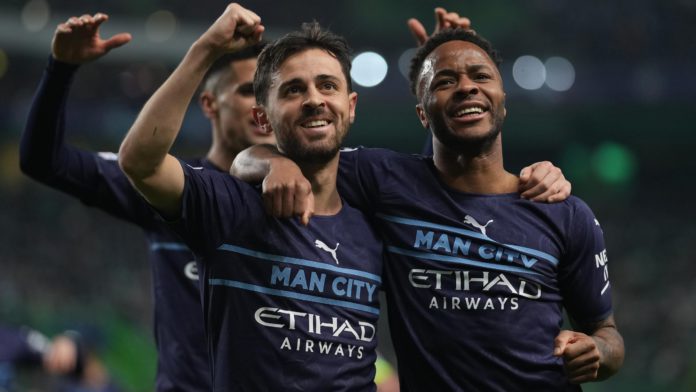 Manchester City dominated Sporting CP in Lisbon as they put five past the Portuguese outfit to plant one foot in the Champions League quarter-finals.

City dominated the first half and broke the deadlock through Riyad Mahrez. The assistant referee had signalled for offside after the Algerian finished off a silky City move from close-range, but the goal was given after an agonising VAR check overturned the decision.

City’s lead was doubled through an exquisite Bernardo Silva finish ten minutes later. The former Benfica star drilled a half-volley beyond Antonio Adan via the crossbar after Sporting failed to clear a corner.

Foden grabbed City’s third, marking his 150th appearance for the club with a goal as he tucked away Mahrez’s cross at the near-post.

Silva scored his second of the night to extend City’s lead to four goals on the stroke of half-time. Joao Cancelo dropped a ball into Raheem Sterling making a clever run in behind the Sporting defence, and Sterling cut it back for the arriving Silva to fire the ball beyond Adan.

The Portuguese midfielder had the ball in the back of the net for the third time five minutes into the second half after heading in a De Bruyne cross at the back post, but it was ruled out for offside.

Pep Guardiola’s side managed to find their fifth through Sterling, who bent a brilliant curling effort into the top right corner from 25 yards out.

The hosts had no reply to the Premier League leaders’ commanding display, as City held on for the clean sheet.