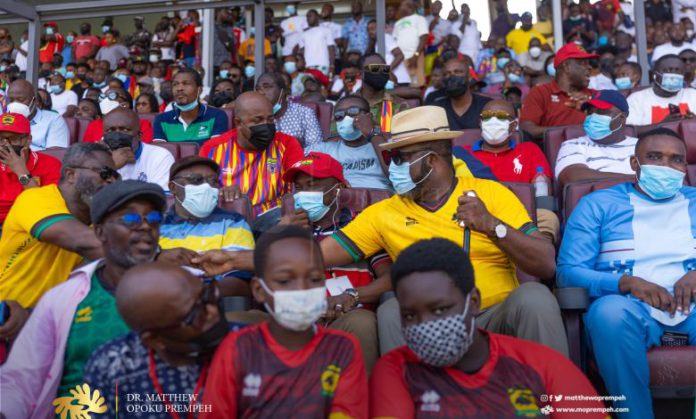 Several dignitaries trooped to the Accra Sports Stadium for the Super Clash between Hearts of Oak and Asante Kotoko in their outstanding matchday 7 encounter on Sunday.

The Phobians were hoping to close the gap between them and the rivals.

However, after 90 minutes of action, the much-anticipated game ended goalless.

Hearts of Oak started brightly and should have taken an early lead when Daniel Barnieh set up Kwadjo Obeng Jnr, whose strike hit the post.

In-form Asante Kotoko striker, Frank Etouga, came close for the Porcupine Warriors in the 36th minute but his effort did not trouble Richard Attah.

Sulley Muntari, who joined the Phobians as a free agent, was impressive in the first half but had to be replaced in the early minutes of the second half by Fredrick Ansah Botwe.

Kotoko who sit top of the league log with 37 points will host Dreams FC at the Baba Yara Sports Stadium while Hearts of Oak, who occupy the 8th position with 25 points will be hosted by Legon Cities at the El Wak Stadium in the matchday 18 games this weekend.

Below are some of the dignitaries: