I can be impartial; not neutral 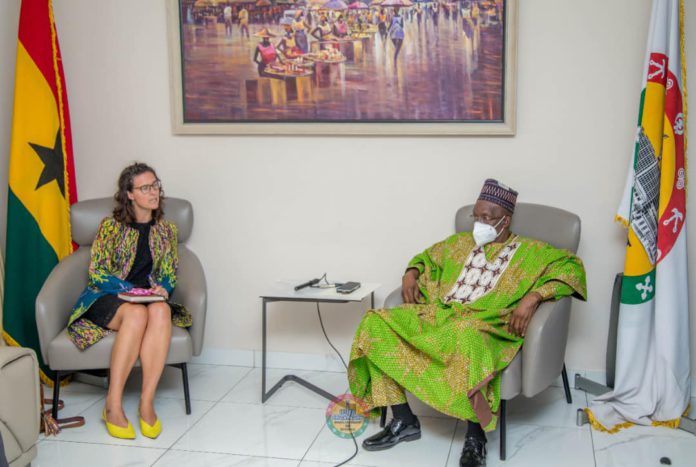 The Speaker of Parliament, Alban Bagbin, has said that as Leader of the House, he can only be impartial but he cannot be neutral.

Speaking in reference to current issues before Parliament concerning the 2022 Budget and Financial Statement, the Speaker said “the concept of majority rule should give way to participatory inclusiveness.”

Given the current changes, Parliament cannot continue to apply the old rules, procedures, culture and conduct whilst going through the transitional period, else the march towards democracy will be halted.

He was speaking to the British High Commissioner in Accra, H.E. Harriet Thompson, who paid a courtesy call on him at Parliament with a delegation to understand the times in which Parliament finds itself, the need for a bi-partisan approach, and the experiences worth sharing.

She also wanted to understand Parliament’s perception of the various engagements with, and support for the institution.

The Speaker underlined the need for continuous support for Ghana’s Parliament in order to strengthen the institution in its work and said democracy will thrive in the West African sub-region only if Ghana’s democracy succeeds.

“If Ghana fails, others would fail as well”, he said. Mr Bagbin called for a mutually beneficial relationship between Ghana and the United Kingdom to ensure that the two countries support one another in their national agenda.

He said Ghana’s Parliament remains committed to strengthening ties with the United Kingdom, which had existed since Independence.

That commitment, he said, transcends to the Commonwealth Parliamentary Association (CPA), whose mandate, Rt. Hon Bagbin believes must be reviewed.

The CPA, he explained, must cease to exist as a charity organization and transition into an international diplomatic organization, facilitating economic diplomacy, strengthening of democracy and promoting fundamental human rights among member associations.

Ultimately, he said, the CPA should create progressive links between member countries and the United Nations.

Speaking on the nature of Ghana’s Parliament, the Minority Leader, Haruna Iddrisu, saw the current composition of the House as a unique opportunity for Ghana’s legislature to become more assertive and enhance the concept of checks and balances in the governance process.

He stressed the need for more dialogue and consensus-building between the two sides of the House in democracy in Ghana is to be sustained and the interest of the citizens served.

He expressed disquiet about the constant negative attacks by the majority group targeted at the person of the Speaker and said, that will not only traduce the Speaker’s character, image and reputation but will only make consensus building difficult to attain and impact negatively on the ethos and integrity of the House.

North Tongu MP, Samuel Okudzeto Ablakwa, was of the view that the interest demonstrated by Ghanaians in the work of Parliament will lead to gradual shift of public perception from the believe that Ghana’s legislature is a lame duck, weak institution and a rubber stamp for Government’s policies.

E-levy, the new elephant in Ghana!