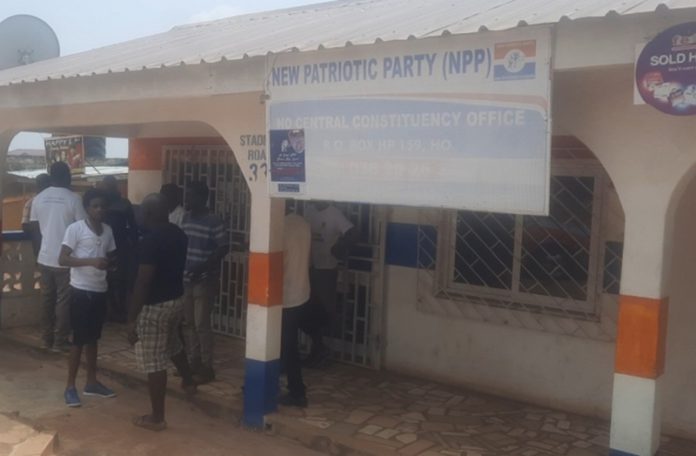 There is simmering tension among members of the New Patriotic Party (NPP) in the Volta and Oti Regions with regards to polling station executive nomination forms.

Some prospective aspirants trouped to the Ho Central NPP office with car tyres, threatening to burn down the office on Monday, after all attempts to pick nomination forms failed.

The aggrieved members alleged that members in charge of the elections are scheming to prevent them from contesting the elections, by denying them access to the nomination forms.

Some of them, who are incumbents, expressed disappointment in the development and called on the party hierarchy to intervene.

“We have not seen the form, we don’t know what it looks like. We need the forms to fill, so we are here to let our leaders know what is happening in Ho Central, they should come to our aid.

“If they sit down for these people to make a fictitious album, it will not favour all of us. This may bring mayhem or misunderstanding between us. We are all one family, we are the elephants,” said a Polling Station Youth Organiser, Efo Michael.

Nelson Kuma Oye asserted that the current happenings might affect the party’s electoral fortunes in the Ho Central Constituency, “because we want to do Ho Central like we did Hohoe in 2020”.

The Youth Organizer for Ziavi LA JHS Polling Station, AKA Vekpo, alleged that he was denied access to the forms though some aspirants in his area have picked theirs.

Meanwhile, the Ho Central Election Committee has promised to ensure all prospective aspirants are issued the nomination forms per the laid down procedures.

There was a similar development in the Biakoye Constituency, where prospective aspirants from six polling stations could not access the forms, after traveling to Dambai, per the directive of the Oti Regional Election Committee.

The aggrieved members have resolved to petition the NPP hierarchy if they could not get the forms before the deadline for submission.