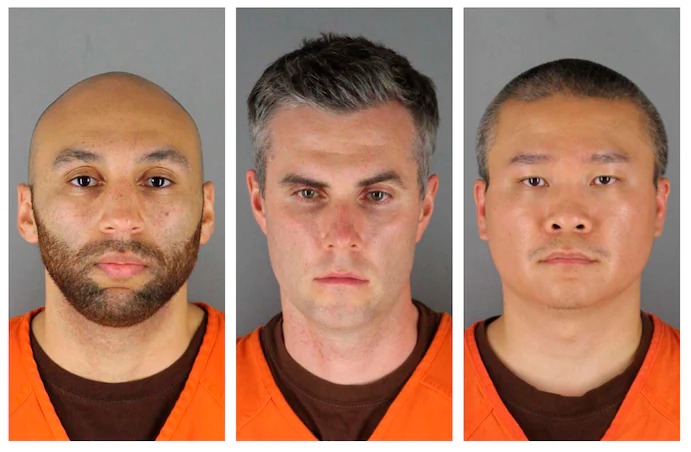 Three former Minneapolis police officers who were at the scene as Derek Chauvin knelt on George Floyd’s neck have been convicted of violating Floyd’s civil rights.

They were convicted on Thursday, Feb. 24, after prosecutors argued that former officers J. Alexander Kueng, Thomas K. Lane and Tou Thao knew Floyd was in medical danger beneath Chauvin’s knee but put their “discomfort in questioning a colleague” above their sworn duty to save a life.

After a month-long trial, a jury found Kueng, Lane and Thao guilty of violating Floyd’s civil rights by failing to provide him medical aid. Kueng and Thao were also found guilty of failing to intervene with Chauvin. The jury found that the actions of all three men caused Floyd’s death.

Lane, who did not face the extra charge, testified that he asked Chauvin twice to reposition Floyd while restraining him but was denied both times.

U.S. District Judge Paul A. Magnuson, who presided over the case, did not order the officers to be taken into custody, citing a separate trial scheduled for June on state charges of aiding and abetting murder and manslaughter in Floyd’s death.

Magnuson said he would announce sentencing in the civil rights case at a later date.

Civil rights attorney Ben Crump and other members of the legal team representing the Floyd family reacted to the former officers’ conviction, They said it’s “another important chapter in our journey for justice” for Floyd.

Crump said: “These officers tried to devise any excuse that could let them wash the blood from their hands, but following these verdicts, George’s blood will forever stain them.

“Today’s guilty verdicts should serve as the guiding example of why police departments across America should expand and prioritize instruction on an officer’s duty to intervene and recognize when a fellow officer is using excessive force.”

Floyd’s brother, Philonise, spoke to reporters afterward, with tears in his eyes.

He said: “I feel like I can breathe again. This is just accountability. It can never mean justice because I can never get George back.”

The former officers, each of whom took the stand in his own defense, said they were deferring to Chauvin, the senior officer at the scene, unsure whether he was using unreasonable force and saying they relied on his experience to guide what they said was a chaotic scene. They also pointed a finger at the Minneapolis Police Department, claiming inadequate and confusing training and questioning why Chauvin was allowed to train young officers such as Kueng.

But acting U.S. attorney Charles Kovats called the jury’s decision “a reminder that all sworn law enforcement, regardless of rank or seniority … have a duty to intervene.”

“It’s a fundamental duty of policing … a duty followed every day by police officers in communities around the United States, often under very difficult circumstances,” Kovats said at a news conference after the verdicts. “Officers Thao, Kueng and Lane on that day failed to fulfill this duty, and as a result, George Floyd senselessly died. That is why they were charged. That is why they were convicted.”

The jury of eight women and four men — who appeared to be mostly White — deliberated for 13 hours beginning Wednesday. Unlike in Chauvin’s state murder trial last year, the federal jury included people from across the state of Minnesota, not just Hennepin County, where Floyd was killed — which had prompted some observers to question whether jurors might be more sympathetic toward the former officers.

The jury’s decision came after about six hours of closing arguments Tuesday in which prosecutors and defense attorneys presented their dueling views of a case that was far more complex than the trial mounted last year against Chauvin, who was convicted of state charges of murder and manslaughter and sentenced to 22½ years in prison.

Kueng, Lane and Thao were charged with what prosecutors say they didn’t do at the scene of Floyd’s fatal arrest — including getting Chauvin off the man, putting Floyd into a side recovery position to help him breathe and performing CPR when Floyd lost a pulse.

“These defendants knew what was happening, and contrary to their training, contrary to common sense, contrary to basic human decency, they did nothing to stop Derek Chauvin, did nothing to help George Floyd. You know it because you’ve seen it,” prosecutor Manda Sertich told jurors during closing arguments, pointing to the numerous videos of the fatal May 2020 arrest that had been introduced into evidence.

But defense attorneys argued that the videos didn’t offer a complete picture of what happened at the scene, including what the officers were seeing and experiencing in the moment, such as their perceptions of Floyd’s condition.

They blamed poor training and shifted responsibility for the man’s death to Chauvin, saying their clients had trusted and deferred to him.