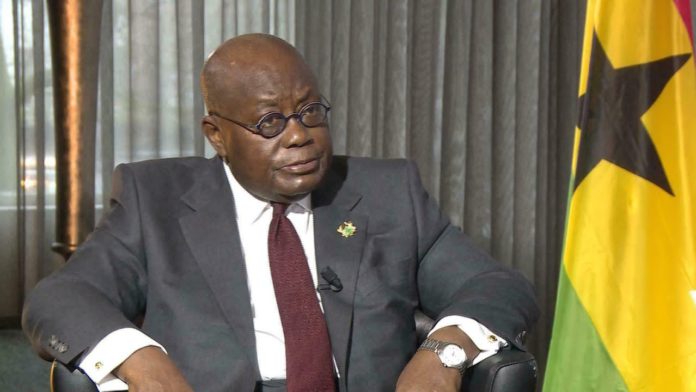 President Nana Akufo-Addo has expressed concern about the impact of the invasion of Ukraine by Russia on the safety and evacuation of Ghanaians and also on oil prices.

In that regard, he has urged students and other Ghanaians in Ukraine to seek help at government places of shelter.

The President said that was to ensure their temporary safety as the government “engages the authorities, our relevant diplomatic missions and our honorary consul on further measures.”

While President Akufo-Addo expressed concern about the potential loss of lives and the safety of Ghanaians, he was equally frustrated by the effect of the conflict on global crude oil prices and its resultant effect on the economy of the country.

In a message conveyed on his behalf by the Minister of Information, Mr Kojo Oppong Nkrumah, President Akufo-Addo said at a time when the world was dealing with rising energy prices and supply-demand imbalances in several precious metals and commodity markets, a steady supply of crude from Russia was crucial.

“This means that fuel prices in the country are contingent on the ongoing conflict and likely to negatively impact Ghanaians, who, for apparent reasons, are already facing spikes in fuel prices,” he added.

“Not only will prices at the pumps rise; an increase in price on oil and natural gas will drive up the cost of electricity,” the President stated.

President Akufo-Addo indicated that Western and European countries were, as of Tuesday, beginning to feel the heat of the conflict, as the price of brent crude oil crossed the $100 per barrel mark to hit a seven-year high after recording an average of $87 in January this year.

He said although most of those countries were looking for alternative sources of crude supply, Russia’s influence in the oil industry could not be discounted.

The President indicated that concerns about a global economic blowback were rattling economies, thereby raising lots of concerns.

“Although the Russian-Ukrainian crisis is not happening on the African soil, the interconnectivity of the world economy and financial markets can trigger reactions in Ghana,” President Akufo-Addo stated.

“Already, fuel prices at various pumps in the country are inching towards the GH¢8 mark, causing transport fares to be increased by 15 per cent, effective February 26, 2022,” he added.

The President further explained that the crisis, when escalated, could spawn supply chain bottlenecks which would lead to an increase in global oil and liquefied natural gas prices and its associated inflationary pressures in many importing countries.

Should the situation continue or worsen, President Akufo-Addo said, the ripple effects could be more broad-based, with an impact on other commodity prices, as well as trade, financial market and, potentially, monetary policy.

“At the micro-level, higher oil prices increase the cost of production, especially for firms that use fuel as an input and engage in transporting goods from one place to another,” he said.

“Also, an increase in oil prices increases the household’s expenses on petroleum products, leaving less to be spent on other goods. This, in the long run, negatively affects the individual’s income and standard of living thereof,” the President stated.

At the macro level, he explained, the higher production cost associated with a rise in oil prices was often passed on to the final consumer by the supplier.

That, President Akufo-Addo pointed out, contributed significantly to the rate of increase in the general price level in the economy.