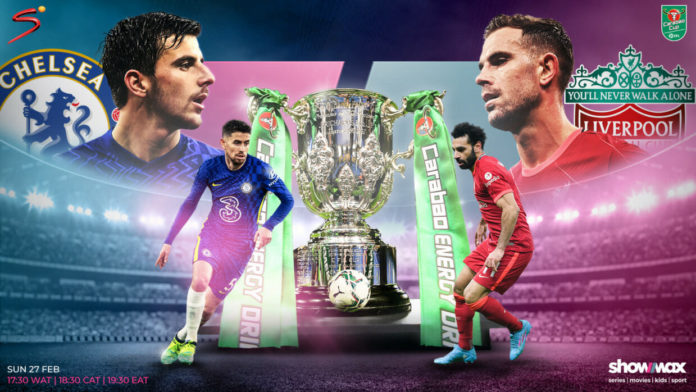 SuperSport viewers on DStv can look forward to the Carabao Cup Final, as Chelsea take on Liverpool at the Wembley Stadium in London on Sunday 27 February 2022.

DStv is the only true home of football in Africa, offering a range and depth of action that no other rival can match – it’s literally ‘Unbeatable Football’! If you’re going to spend your money on something, it may as well be on the best football in the world.

The first piece of silverware on offer in England this season will be battled for by the Blues of Chelsea and the Reds of Liverpool. The latter club is looking to move back to the top of the pile for all-time EFL Cup trophies – they are currently tied for first place on eight titles with Manchester City, with Liverpool’s last triumph coming in 2012 – while the former has five titles in this competition, the latest of which arrived in 2015.

“I come from a club where it was very very important to win trophies. Defined itself for trophies. It is good that we are not shy to say we want to win it and we want to be in finals and want to win finals,” said Chelsea boss Thomas Tuchel.

“I’m pretty sure the game [Carabao Cup final]  will not be about two German managers but two really good football teams,” Liverpool manager Jurgen Klopp said. “We wanted desperately to go to the final, now it’s Chelsea… fine. Let’s give it a try!”

Jorginho – The Italian midfielder dictates Chelsea’s passing rhythm and his composure in the middle of the park will be vital against the pace and power offered by Liverpool. Expect Jorginho to play a key role in the Carabao Cup final.

Mohamed Salah – The Egyptian forward proved his class on the international stage with a strong Africa Cup of Nations tournament for Egypt, but now it will be time for him to lead Liverpool to a triumph at Wembley Stadium.

In head-to-head stats, Chelsea and Liverpool have met in 190 matches across all competitions dating back as far as 1907. The Reds have claimed 82 wins compared to 65 for the Blues, while 43 games have been drawn.

The teams last met in a thrilling Premier League clash at Stamford Bridge in January of this year which ended 2-2: Liverpool led 2-0 through goals from Sadio Mane and Mohamed Salah, but Chelsea fought back via a wonder strike from Mateo Kovacic and an equaliser from Christian Pulisic.

Thomas Tuchel v Jurgen Klopp – These two German managers differ somewhat in style and temperament, but both are relentless in pursuit of victory and will be itching to claim the Carabao Cup for the first time in their careers.

N’Golo Kante v Jordan Henderson – Kante is arguably the world’s best central midfielder, offering both defensive brilliance the ability to drive forward with the ball at his feet. Henderson will be tasked with nullifying the Frenchman’s influence on the game.

Romelu Lukaku v Virgil Van Dijk – This battle is probably the closest football has to a heavyweight boxing match – in that both players are renowned for their physical prowess… and a whole lot more besides. The winner of this personal duel could lead his team to Carabao Cup glory.

No rival can compete with SuperSport’s coverage. Our viewers on DStv enjoy an unrivalled selection of football from around the world!

Don’t miss the New Football Season on SuperSport on DStv. Visit www.dstv.com to subscribe or upgrade, and join in on the excitement. And while you’re on the move, you can stream matches on the DStv App.