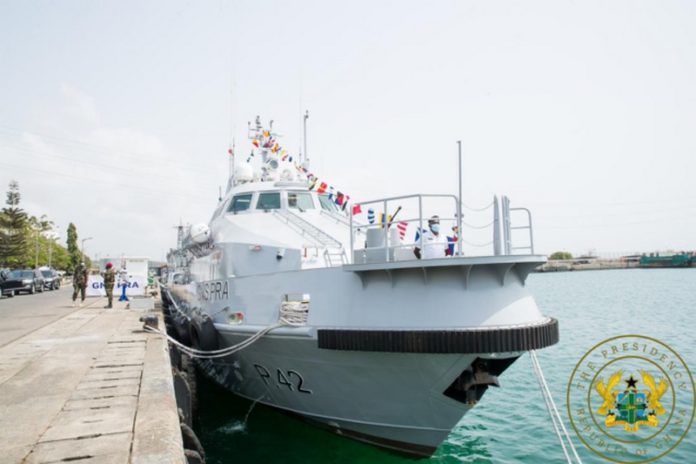 President Nana Akufo-Addo, on Friday, February 25 2022, commissioned four new vessels acquired for use by the Ghana Navy, at a ceremony at the Sekondi-Takoradi Naval Base.

The acquisition of these vessels, according to President Akufo-Addo, “is yet a further manifestation of the commitment of Government to retool and re-equip the Ghana Armed Forces to enable them to perform their duty of protecting the territorial integrity of our nation.”

“This is in recognition of significant progress being made by the Armed Forces to end illegal mining in our river bodies and help restore them to their natural state. Naming these ships after them is entirely appropriate,” he said.

With Ghana, and, indeed, West Africa, currently confronted with twin threats posed by terrorism and violent extremism from the Sahel, and by piracy in the Gulf of Guinea, President Akufo-Addo stated that his government is determined to do everything within its power to guarantee the nation’s territorial integrity, and ensure the safety of Ghanaians.

Outlining the actions that have been taken to protect the country’s northern borders from the onslaught of violent extremists and terrorists, the President stated that the Northern Border Project, designed to safeguard our land borders in the North, is progressing steadily.

This, he said, will include the establishment of forwarding operating bases (FOB) along the northern perimeters, and equipping them with state-of-the-art equipment to defend the country.

He added that with the country’s economy highly dependent on offshore resources, coupled with the enormous potentials of the maritime sector to contribute to Ghana’s food security and employment generation efforts, he stated that these make the provision of effective maritime security of the utmost necessity.

“Therefore, the Ghana Navy, as the lead maritime security agency, deserves all the support it needs to enable it carry out its duties efficiently and effectively,” he said.

President Akufo-Addo further stated that “In addition to these four ships being commissioned today, Government is in the process of acquiring two offshore patrol vessels with high endurance limits, to maintain a constant presence at sea.”

Government, he further added, will also procure some more patrol vessels to respond to the myriad of threats along the coastline, stressing that “financing for the acquisition of these ships has been already provided for in the security sector retooling programme initiated by the Akufo-Addo Government”.

The President was confident that with the arrival of these four “river class” ships, as well as the imminent coming into play of the others, the Navy, working in collaboration with other services, will be well-equipped to protect our maritime domain, which will, in turn, serve as a boost for the fisheries and shipping sectors, as well as for offshore oil and gas production.

“Indeed, these four ships are to provide dedicated security to our offshore oil and gas installations, which have, hitherto, been, regrettably, unprotected. They were acquired through a public-private partnership between the Ministry of Defence, Israel Shipyards Ltd, Ghana Commercial Bank, and two international oil companies,” President Akufo-Addo said.

He, thus, reaffirmed his confidence and that of the nation in the competence, dedication and professionalism of the officers, men, women and civilian staff of the Ghana Armed Forces.

“Their loyalty to the Republic and to the maintenance of its constitutional order continues to be exemplary. I am glad to note, in particular, the achievements of the Navy in the fight against piracy, fuel smuggling and other maritime crimes,” he said.

On his part, President Akufo-Addo reassured the security services that his Government will not waiver in its quest to empower the security and intelligence services.

“On your part, the Ghanaian people expect you to superintend over the judicious and productive use of these assets, so as to help secure the integrity, peace and stability of our nation,” he added.