Three arrested for unlawful possession of weapons and impersonation 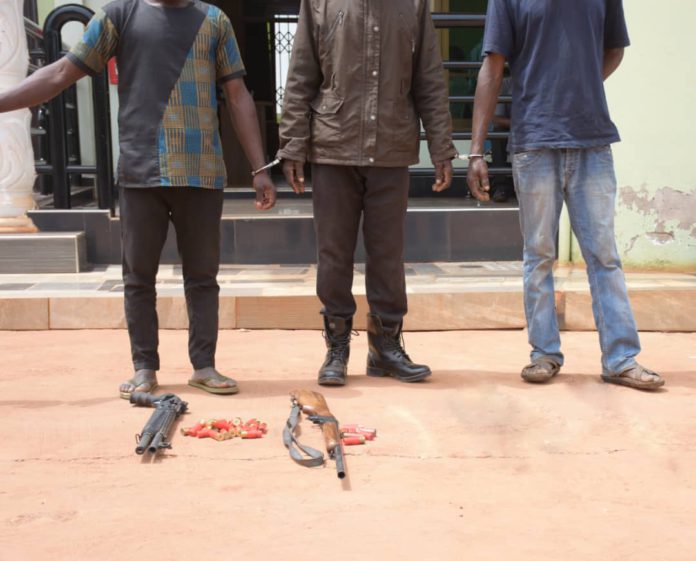 They have been identified as Kobina Domanle, 47 years, security personnel of a Gaza security, Dzahile Kofi Anoumou Delali, alias Mark, a dealer in cashew nut.

Police sources indicate one of the suspects, Dzahile Kofi Anoumou Delali, hired a truck driver to cart his cashew nuts from Fiamah in the Nkoranza District to Jama, near Techiman on a Police escort.

However, the truck driver became suspicious after they met Prosper Kwame Boaho, the supposed officer for the escort with a pump-action gun at Tamale station, Techiman, where he was to pick him for the trip.

Police were immediately alerted, and the suspect was arrested with the pump-action gun and 22 BB live cartridges.

“Investigations reveal that suspect is a self-styled security supervisor of ‘Gaza security’ which does not exist. However, he had employed Kobina Domale as a security officer at Vziit Cashew Company at Jama near Techiman, and Mark, the cashew nut dealer, as the owner of the gun,” a statement, signed by the Regional PRO ASP/Mr Amponsie Bosie Dankwa, read.

A third suspect, Kobina Domale, was arrested with a locally manufactured single barrel gun with seven BB cartridges at his duty post.

All three have since been remanded into Police custody by Techiman Circuit Court for the
offence of unlawful possession of weapons and personation.

Meanwhile, the Command has advised individuals and organisations in and around the region to exercise due diligence in order to avert engaging any such unscrupulous entities in the area.