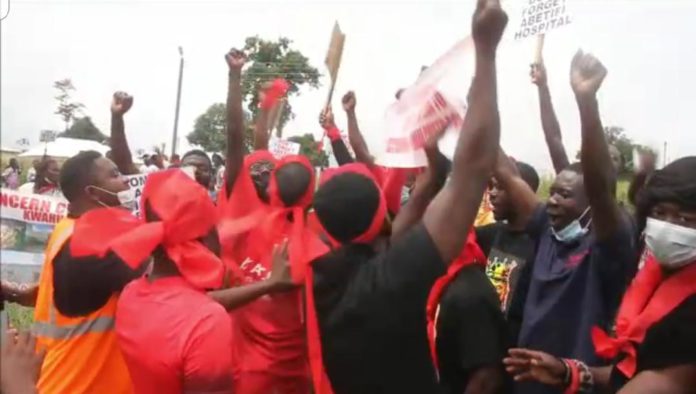 A coalition against the leadership of the Trades Union Congress (TUC) and Organised Labour has declared that they would embark on a demonstration if government tempers with salaries.

According to the Executive Secretary of the group, Azumbila Emmanuel Abdul-Salam, not paying workers due to the failure to pass e-levy is very disrespectful on the part of workers in the country.

Further expressing his displeasure, he noted that the Coalition “is not going to sit down for that three months to come for us to go to our bank accounts and meet empty salaries.”

“Coalition is putting things together, and we want to contact the Speaker of Parliament to know the source of his information and know-how valid the information is….We will take action prior to that time. We are not going to sit down at all like our Union Leaders are saying,” he said.

He added that the Coalition “very soon you will hear about our demonstration schedules.”

This is in connection with the comment Speaker Alban Bagbin passed on Thursday, February 24 in Parliament that government may not be able to pay salaries in the next three months if critical steps are not taken.

“This is not to discourage the committee from doing their work. If something is not done within the next three months, the government may not be able even to pay salaries,” the Speaker said.

This notwithstanding, it is unclear what constituted this forecast as the Speaker fell short of giving further details.

“The Article 71 holders, they are the ones taking huge sums of money, and their fuel allowance alone is our annual salary. So why can’t they threaten themselves? They should threaten the MP that they won’t fuel their car to Parliament if they fail to pass the e-levy,” he said.

He noted that if the salaries of Article 71 holders and budgetary allocation to the Presidency are cut, these conversations will not be raised.

“They should cut down the almost $488 million allocated to the Presidency alone and budgetary allocation to the president,” he observed.

He noted that it is unfortunate for the public workers to be threatened with their salaries.

Meanwhile, the Executive Secretary of CLOGSAG, Isaac Bampoe-Addo, doubted the authenticity of the Speaker’s message and asked for the Speaker to provide the source of his information.

He, therefore, stated that he has no comment on the issue.

“If it’s the Finance Minister or Employment Minister who is speaking yes, the Speaker of Parliament at least let’s know the source of your information,” he said.

Govt to meet relatives of Ghanaians in Ukraine on Tuesday, March 1