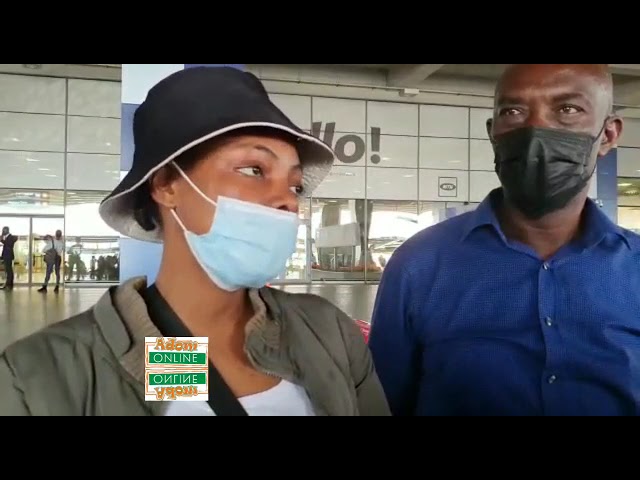 The first batch of the Ghanaian students evacuated from Ukraine have touched down at the Kotoka International Airport.

Following a state of conflict that escalated between Russia and Ukraine after the former launched a large-scale invasion of Ukraine, Ghanaian students have cried out for their safety.

It is for this purpose that the Ministry of Foreign Affairs began an evacuation exercise that successfully saw the first 16 persons arrive in the country.

One of the students who gave her name as Ewoenam, in an interview with Adom News at the airport, described the traumatizing events she witnessed while in hiding.

She recounted how it was a tussle being transported to Romania before struggling to be listed among the first-16 in the Foreign Ministry’s list.

“It was very very difficult,” she said while challenging her memory to recollect how she fought, pushed and struggled with other Africans and victims.

Ewoenam said that when the earlier decision was made to evacuate women, mothers and children, the students who did not fall in that category began wailing.

“The women were shouting because they were saying only mothers and babies can pass through. The African boys were there the whole day, the whole night to the next morning. It was so stressful. I really don’t know how to explain it for you to see how stressful it was.”

She fears those still ‘trapped’ would have a hard time as road networks have been blocked, all means of transportation ceased.

According to Ewoenam, her classmate is still fighting in Ukraine and she is “really in a bad condition”.

Speaking on stories of racism, the student confirmed Ukraine airport and Poland was a horror.

However, she said they were treated very well when they arrived in the Romanian camp, which was their transit point before they were subsequently evacuated to Ghana.

Watch video below for more: