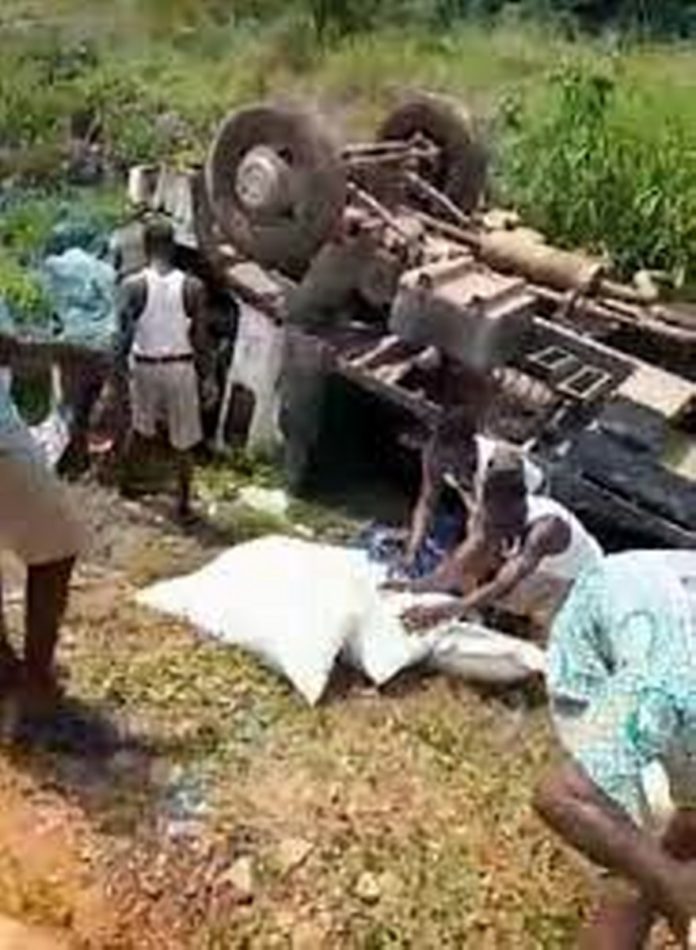 A truck transporting flour from the National Buffer Stock to Senior High Schools (SHS’) has been involved in an accident at Akyem Asiakwa in Abuakwa South Municipality in the Eastern Region.

This was on Tuesday, March 1, 2022, while the truck driver was crossing a wooden bridge after offloading bags of flour at the school.

The driver reportedly ignored a road sign, cautioning loaded and heavy-duty trucks not to use the bridge coupled with advice from the headmaster, Samuel Anarfi Asante to use a different route.

Mr Anarfi is said to have explained to him the bridge has been in a deplorable state for a long time while several letters written to the municipal assembly and other relevant institutions are yet to yield any positive results.

But the driver who had just crossed the bridge was confident he could crossover with the remaining 80 bags of flour.

Unfortunately, the bridge collapsed midway through the trip, causing the truck to topple over and landed on the side of the road.

The driver and other occupants however escaped unhurt though the bags of flour fell into a nearby ‘stream’ and wet the goods.

The students of STEPSS came to his rescue to help carry the flour to a safe spot.

Chief, 8 others arrested after alleged murder of man over dog meat [Video]