Damba festival lights up Obuasi amid rich display of culture 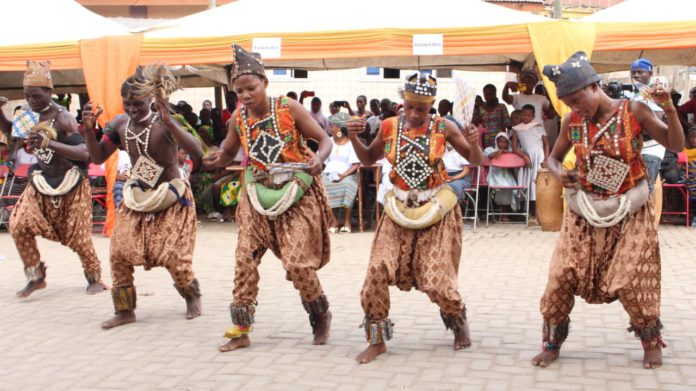 The entire mining town of Obuasi went agog as hundreds of people from all walks of life troop to the Zongo Play Grounds to join in the celebration of this year’s Damba festival.

The event was organised by the Dagomba youth group based at Obuasi.

There was an exhibition of rich culture from the various Northern Regional tribes at the festival which commemorates the birth of Prophet Mohammed.

It was also to signify unity, cooperation and coexistence among the people.

The two-day celebration was under the theme, ‘Harnessing Our Cultural Diversity for Job and Wealth Creation.’

The Chairman of the Dagomba Youth Association, Shaban Ibn Bawa, in his speech, said the celebration of the Damba festival dates back to the 18th Century during the reign of Naa Zanjina.

He emphasized that the festival was mostly celebrated by the Dagombas but has now spread to other stratified Northern tribes like Mamprusi, Gonja and Wala.

He advised that Dagombas and other Northern tribes should use occasions like the Damba festival to unite and co-exist peacefully since the festival symbolises unity of the Mole-Dagban and all the sons and daughters of Naa Gbewaa.

Touching on the theme for the celebration, Mr. Bawa said the youth should strive to acquire entrepreneurial skills which will guarantee them a secured future other than adopting the “get rich quickly syndrome”.

The Queen Mother of the Edubiase Traditional Council, Nana Akua Dwom II, who graced the occasion with the Dompoase Kontihene, Nana Bosompim Kitikyi Appenteng, extolled the Damba festival and praised the organisers for assembling most of the tribes in Ghana to exhibit their culture.

She emphasized that the only panacea to Ghana’s development is for the people to accommodate or tolerate other tribes.

She said ” the mere fact that we are here should tell everyone that, with unity of purpose and tolerance for divergent views and other cultures, Ghana will develop beyond what we are seeing now”.

A founder of the Dagomba Youth Association at Obuasi, Masawudu Arabia, called for the need for Zongo Youth to prioritize higher education.

He said “gone are the days when youth from Zongo were associated with all manner of crimes but the time has come for us to prove to the world that people from Zongo value the essence of formal education.”

He reiterated the call for peaceful co-existence.  He said peace is an enabler to enhance development and that all must give peace a chance. He urged the people to do away with division, because that would retard development in the area.

The Damba festival is celebrated by the chiefs and peoples of the Northern, Savanna, North East and Upper West Regions of Ghana. The name Damba is Dagbani, Damma in Mampruli and Jingbenti in Waali.

The festival is celebrated in the Dagomba lunar month of Damba, corresponding to the third month of the Islamic calendar, Rabia al-Awwal. Damba is celebrated to mark the birth and naming of the Holy prophet, Muhammad, but the actual content of the celebration is a glorification of the chieftaincy, not specific Islamic motifs.

The Damba is also celebrated among the Gonjas of the Savanna region. The Gonjas normally have a specific month of which the celebrate the festival. The festival is categorized into three sessions; the Somo Damba, the Naa Damba and the Belkulsi.

The festival starts on the 10th day of the month of Damba with the “Somo” Damba, followed by the ‘Naa’ Kings Damba on the 17th day, with the “bielkulsi”, which is the climax of the celebration, coming off on the 18th of the month of Damba. Within this period, prayers are offered to ancestors, drumming and dancing, families pay visits to friends and exchange gifts.

Fuel price to hit GH¢9.00 per liter before end of March – COPEC

CONFIRMED: Chelsea is for sale