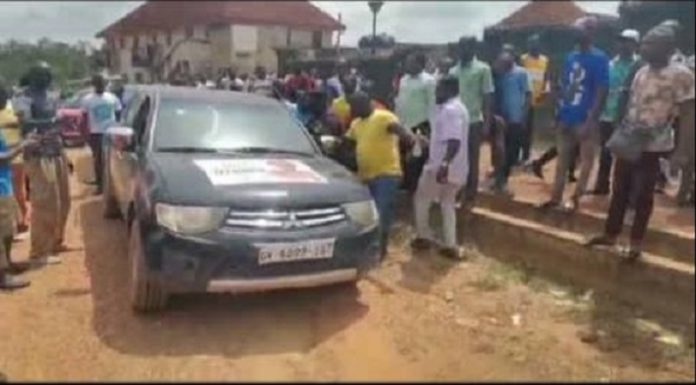 The Eastern Regional Chairman of the ruling New Patriotic Party (NPP), Kingston Akomeng Kissi, has been chased out by a mob of party supporters at Akyem Oda.

The incident occurred on Tuesday, March 1, 2022, after the Regional Chairman, Akomeng Kissi, allegedly decided to call off the polling station election in the area allegedly to enable old executives to go unopposed.

A video that captured the incident saw the angry mob banging on the vehicle of the Regional Chairman who was seated in the vehicle.

The Chairman of the elections committee for Akim Oda constituency said he did not sanction the meeting and the decision taken therein.

Polling station elections are being held in the party nationwide between February 25, 2022, and March 5, 2022.

Meanwhile, NPP Financial Secretary at Akyem Oda, confirming the incident on Asempa FM’s Ekosii Sen show, defended the action of the members saying the chairman has taken them for granted for far too long and therefore it was best that he was chased out in order for them to have a smooth process.

Eric Nkansah said although the election was faced with challenges, they will still go ahead and organise elections as NEC is the only decider in the elections.

Listen to his interaction with show host, Osei Bonsu in audio below: