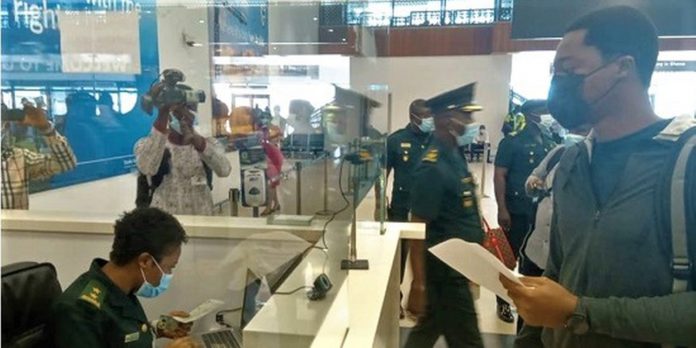 Ghanaian passengers who were admitted into the country for the first time with the Ghana Card, instead of passports, have described the system as fast and convenient.

Numbering 14, the passengers, who arrived at the Kotoka International Airport (KIA) at about 11:15 a.m. on Monday, March 1, 2022, onboard an Ethiopian Airline flight (ET 921) from Addis Ababa, went through the process, which was conducted by officials of the Ghana Immigration Service (GIS).

This came to light when officials of the GIS took some journalists to the arrival hall of Terminal 3 of the KIA to observe the process as part of the official introduction of the use of the Ghana Card, March 1, as an ICAO-compliant travel document.

In separate interviews, two of the passengers, Mr Dennis Bekoe, who arrived from the United Kingdom (UK), and Ms Akua Mansa from South Africa, said the card was easier to use, as against the passport, since they spent less time going through the arrival processes.

The Deputy Head of the Management Information Systems (MIS) Department at the GIS, Chief Superintendent Sharif Karikari, told the media after the observation of the arrival process that some booths had been designated as places to admit Ghanaians with Ghana cards into the country.

On arrival, he said, the identity of the Ghana Card holders would be verified against the national identity register “before we go ahead to admit the passenger to be sure the owner is, indeed, the rightful owner of the card.”

He added: “When one has only the card, we process the person through the system, and after verification, the person is processed through the embarkation card and then he is admitted into the country.”

Furthermore, Chief Supt Karikari said all the airlines had been communicated to on boarding with Ghana cards.

Responding to a question on foreigners with the Ghana Card, he said “those with non-citizen cards who are foreigners can not use it because they are other nationals.”

He said once a Ghanaian passenger was successfully verified, that person would be admitted into the country.

The Head of Public Affairs at the GIS, Supt Michael Amoako-Atta, said the first step was for Ghanaians travelling into the country.

He said the next step was for the country to have a bilateral agreement with any other country that would want to have that kind of reciprocal travel agreement.

“What we are doing now is to help Ghanaians who come to Ghana and most importantly also for dual national card holders. They do not need to apply for visas, they just come and they will be cleared,” he stated.

He further indicated that the GIS had data that were accurate and easily accessible and added that the use of the card was also for the convenience of travellers because it was electronic.

The GIS last Monday announced that it would, from March 1, 2022, begin to admit Ghanaian passengers and dual nationals returning to Ghana on a valid Ghana Card as a result of the official recognition of the Ghana Card as an ICAO-compliant travel document.

It said the Ghana Card would serve as an optional travel document, but reminded the public that until bilateral agreements were signed with other countries, the card could not be used to travel outside the ECOWAS sub-region.

“Ghanaians who have renounced their Ghanaian citizenship to obtain the citizenship of another country are not eligible to travel on the Ghana Card, while dual nationals holding the Ghana Card will not require visas to enter Ghana,” it stated.

On departure, the Ghanaian who entered Ghana with the Ghana Card would be required to show the card to Immigration officials at the Immigration Departure Control.

The statement said a passenger who arrived in the country with a fraudulently acquired or fake Ghana Card would be denied entry and/or arrested and prosecuted in accordance with applicable laws.

It said it was an offence under Section 52 of the Immigration Act, 2000 (Act 573) for a person to fraudulently acquire or use a forged or fake travel document, and that convicted offenders might be fined and/or imprisoned.