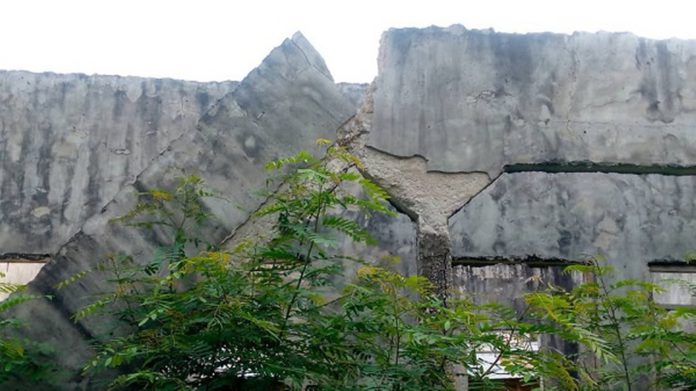 Information gathered reveals that the pupils were hiding in the building during a heavy rainfall when the building collapsed and nearly killed them.

A check on the building suggests that the project commenced eleven years ago during the late President John Evans Fiifi Atta Mills’ regime but has been abandoned for many years since the regime ended.

Local reports suggest the chiefs and residents of the area had threatened to pull down the building due to its weak state.

But, Member of Parliament (MP) for the area who now doubles as the Deputy Minister of Education, Rev John Ntim Fordjour and then District Chief Executive Derrick Owusu Ambros when contacted, promised to renovate and complete the building but have since failed to do so.

Interviewing pupils of the schools, they said the building had become a death trap to them making it scary whenever they were on break and want to play around.

They have, therefore, called on the government, the Assin South MP and DCE to intervene and complete the building to prevent any deaths.

Some residents have also threatened to pull down the building if the government failed to attend to it.

Meanwhile, the Parents Teachers Association (PTA) Chairman of the school, Osei Yaw Akoto, said the PTA had done its best for the building to be completed but hasn’t succeeded.

He said the school’s population has reduced drastically due to the nature of the building.

The Chief of Assin Dawomako Nana Sakyi Akomea also called for the pulling down of the building if the government has no immediate plans of completing it.

He nonetheless called on philanthropists to come to the aid of the school.