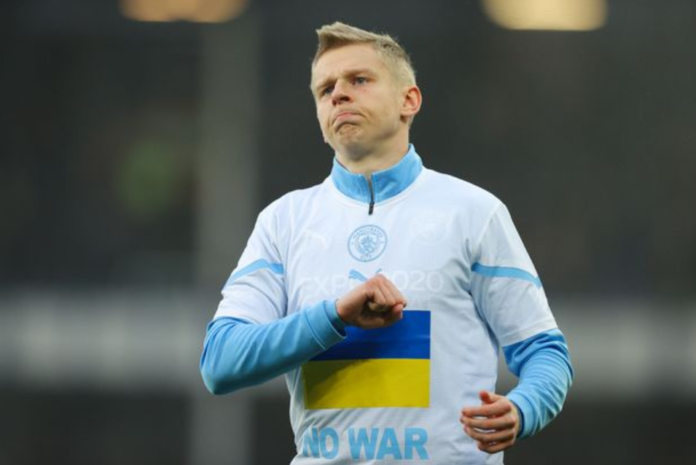 Oleksandr Zinchenko has thanked the world for standing with Ukraine in an emotional interview with BBC Sport about the Russian invasion of his homeland.

The 25-year-old Manchester City left-back was named captain for the midweek FA Cup win over Peterborough and carried out the Ukraine flag before the match.

Since Russia invaded Ukraine a little over a week ago, about a million Ukrainians have fled to safety while many others have stayed to fight.

The international community has almost universally backed Ukraine, in many cases sending weapons or imposing sanctions on Russian companies or individuals.

Zinchenko, who has family and friends in Ukraine, told BBC about “his mission” to tell the world what is happening in Ukraine.

“At midnight UK time, my wife woke me up and she was crying,” the Ukraine international says of how he discovered the invasion had started.

“I was in shock. She showed me the videos, the pictures, what’s going on now in Ukraine.

“Maybe the most closest feeling is when someone from your circle is dying. You know, this feeling like you feel so bad inside. But this is even much more worse.”

Nine days into the war and he says the emotion keeps hitting him.

“I’m just crying. So already a week, I’m not counting, but even I can drive the car from the training ground, or it doesn’t matter where, I can just cry from nothing,” he said.

On his pride in Ukrainians who won’t give up

Many Ukrainians including Zinchenko’s friends have stayed to fight Russia, with some who live abroad returning home for the war.

“I’ll be honest, if not for my daughter, my family, I would be there,” he said.

“I’m just born like that. I know the people from my country, the mentality of them, and all of them, they think exactly the same.

“I’m so proud to be Ukrainian, and I will be forever for the rest of my life. And when you’re watching the people, how they fight for their lives.

“I know the people, the mentality of my people from my country, they prefer to die, and they will die. But they’re not going to give [up].”

On the world standing by Ukraine

He said he had been overwhelmed by support he had received from football fans, from people in the street and also form seeing donations from the British public.

“I’m so grateful,” he said. “I’m so grateful to all these people for the support I’m getting here. I didn’t realise it’s going to be like that in this way. So I would like to say all of them big thanks. I appreciate it.

“I’m getting a lot of messages from a lot of guys in Ukraine and they are asking me about the videos of support [from the UK].

“So people are watching TV, the people are still watching football, and they can see all these things, and I guess it helps a lot for them

“It’s like, the people who are supporting Ukraine, they are trying to push them – don’t give up. And I know my people they won’t.”

On his mission to let the world know what is happening

Zinchenko feels his “mission is to show the world the real truth and what’s going on now in Ukraine”, especially amid Russian propaganda.

“I spoke with many people who are on our side. And they said that the way Russian TV is showing us is ridiculous.

“My mission is to show the rest of the world what’s going on in this moment.

“There are few cities in the lowest part of Ukraine where the civilians, Russian people, are coming and they do fake protests that like ‘we want to be with Russia’ and stuff like that.

“The people are starving there. The people are just surviving, sleeping on the ground, in bunkers, they cannot live a proper life.”

Zinchenko revealed that was the reason he wanted to do the interview.

“I was thinking a few days about this interview. Should I do it? Should I not?” he said.

“But I just want to send the message to all the people that please don’t ignore this. We need to stop the war.”

On his disappointment in Russian footballers

Zinchenko has said he is really disappointed that no Russia internationals have spoken out against the invasion.

Russia captain Artem Dzyuba even spoke out against his country’s suspension from international tournaments by Fifa and Uefa and said “I am proud to be Russian”.

Zinchenko said: “I was surprised that no-one, not one of them, from all of them [has said anything].

“Most of them play in the national team and they have a lot of followers on Instagram, Facebook, wherever.

“And they can, they can at least they can do something to stop this war. Because the people can hear them.

“I already know that they scared. But they’re scared of what? They’re not gonna do anything with them.

“At least they can say their positions, but they don’t they just ignore it. I don’t know why.”

Court issues bench warrant for the arrest of self-styled Chief