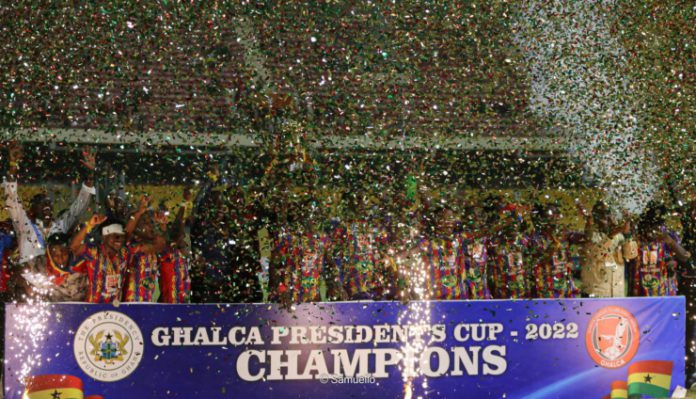 Hearts of Oak winger, Patrick Razak, came off the bench to score a late winner for Accra Hearts of Oak as they beat Asante Kotoko in the President’s Cup final on Friday, March 4, at the Accra Sports Stadium.

Razak restored the Phobians lead after Samuel Boateng came off the bench to equalise for the Porcupine Warriors after Daniel Afriyie Barnieh had given the Accra-based side the lead.

Both teams named a strong starting line-up for the game with a trophy and bragging rights at stake at the Accra Sports Stadium.

Despite an interesting end-to-end stuff in the opening 45 minutes, there was no goal to separate the two sides as they headed into the break wth the score at 0-0.

Hearts struck shortly after the recess through Afriyie Barnieh, who reacted the quickest to a rebound after a beautiful play from Salim Adams saw Fatawu Mohammed put in a teasing cross into the Kotoko box.

The Under-20 Africa Cup of Nations winner opened the scoring to give the Rainbow club a deserving lead.

However, substitutions from Prosper Ogum Narteh saw Boateng climb off the bench to level the score for the Porcupine Warriors with 13 minutes to go.

Kotoko were hoping to snatch a late winner with minutes to go but substitute Razak pounced on a through ball from the Hearts defence before rounding off the keeper to put the ball into the net.

The game ended 2-1 with Hearts going on to win the 2022 edition of the President’s Cup.