Tamale Police on manhunt for 15 suspects over Dakpema Palace shooting 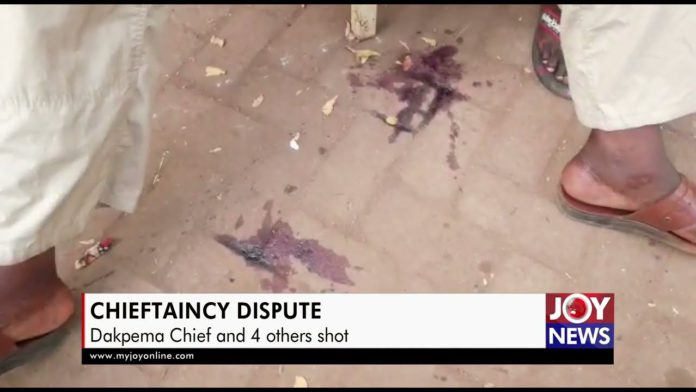 The Northern Regional Police Command has started tracking some 15 persons suspected of raiding and attacking the Dakpema palace in Tamale on Monday dawn.

About five persons, including the Dakpema, Naa Fuseini Bawa, sustained several injuries after the unidentified suspects launched a gun attack on the palace over an existing chieftaincy rift in the metropolis.

It is said the incident took place after the talking drum was beaten in the palace on Monday dawn, an action that signifies that the Dakpema is the Chief of the area.

Speaking to JoyNews after the incident, the Northern Regional Crime Officer, Superintendent Bernard Baba Ananga, said the Police are treating the incident as a crime.

He indicated that a joint Police and military team has been tasked to arrest the suspects as soon as possible for further investigations.

“We are still getting more information which we think we may not like to share so openly like that because we have suspects to arrest. So we have declared manhunt, or we have declared a kind of Police-military tracking of those suspects that we believe are involved.”

“We had to make sure that we get them arrested and make it known to you. We have about 15 of them who were in a white Toyota Hilux Pickup.

“We believe there were others too as well; maybe the numbers may be higher than that [but] we’d make sure that we pursue them,” he said.

The victims are being treated at the Tamale Teaching Hospital and are under stable conditions.

There has been seeming tension in the Tamale metropolis over who is the Chief of Tamale.

Whilst the Dakpema claims the title of Chief of Tamale, the GulkpeNaa holds the same position, a situation which caused the Dagbon Overlord, Yaa-Naa, to issue an order restraining the Dakpema from carrying himself in that position.

According to the Northern Regional Minister, Shani Alhassan Shaibu, the Regional Security Council has deployed officers to the Dakpema Palace and will continue monitoring the situation.

“There was a ban on the Dakpema not to play the talking drum. Culturally, every Monday and Friday, the talking drums are played at some selected palaces to signify the beginning of the week and the end of the week. The Dakpema of late has been having issues with the Gukpena over who is the Chief of Tamale.

“This matter was referred to the Yaa Naa some one month ago. The Yaa-Naa pronounced that the GulkpeNaa was the Chief of Tamale, so they restrained the Dakpema from performing such functions like playing the talking drums, but he remained defiant to the effect he still wanted to carry on with that,” he told JoyNews in an interview on Monday.