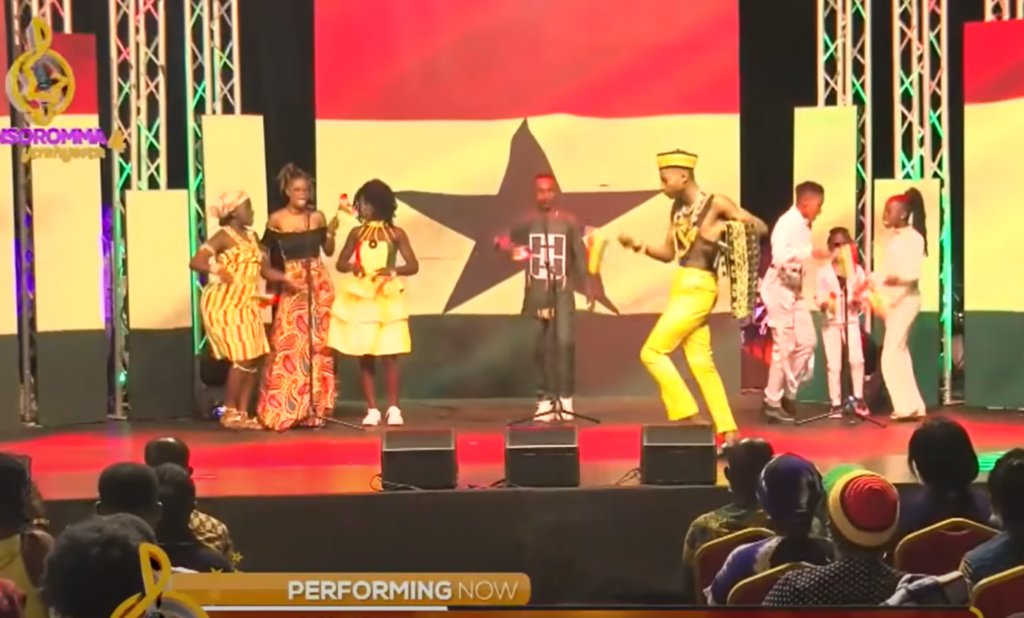 Adom TV’s talent reality show, Nsoromma Season 4, joined in celebrating Ghana’s independence since it can’t be overlooked as the month of March is seen as Ghana month.

As part of celebrating Ghana, the eight Nsoromma contestants gave an awesome performance with Amandzeba Nat Brew’s ‘Biako Ye’ song as they prepare the audience for the individual performances.

Beginning the show, Lady Theodora Pascal stormed the stage to perform ‘Confusion’ by Kuami Eugene. She handled the song very well as she sang the song smoothly with a bit of stage attitude making good use of the stage.

Anita Anim performed ‘Aseda’ by the late Ebony Reigns in a grand style. While performing, she sang the song exactly as the late Ebony and used the tone used by Ebony in her song and emulated how the singer performs on stage.

Samuel Sam, also known as Samzik, came in with a lot of energy as he performs Kofi Kinaata’s ‘Last Show’ song. He had a command of the instrumentals and that of the song he performed, blending it with stage attitude and sweeping the audience off their feet.

Nhyira Akoto Afriyie, on the other hand, rocked the stage in her Ghanaian outfit to perform ‘Sobolo’ by Stonebwoy.

She came to the stage with a calabash depicting she was selling drinks and was clad in kente with beads around the neck and arms. She got a standing ovation from the judge, Akosua Agyapong.

Late Ebony Reigns’ song ‘Hustle’, was performed by Keziah Adu. Though she wasn’t in key when she started, she picked up along the line and performed the song very well. She came in with a few clothes to portray the concept of the song.

Francisca Adom performed ‘Enjoyment’ by Kidi while demonstrating some dancing moves as she dances to the tune. She made use of the stage and got everyone glued to her performance.

Kuami Eugene’s ‘Ohemaa’ song was beautifully performed by Daniel Antwi. Attired in African wear like a prince with beads around the neck, wrist, and a nice cap. He did justice to the chosen song and performed it well.

Precious Mbir and Reneil Aboagye ended the show in a whole different mood as they perform ‘No Dulling’ by Keche with so much energy. It was a sight to behold as these amazing girls handle the song well.

In the coming week, Samzik will be performing with Nsoromma Season 3 finalist, Grace Adom Sarkodie.

For five years, I had close relatives sexually assault me