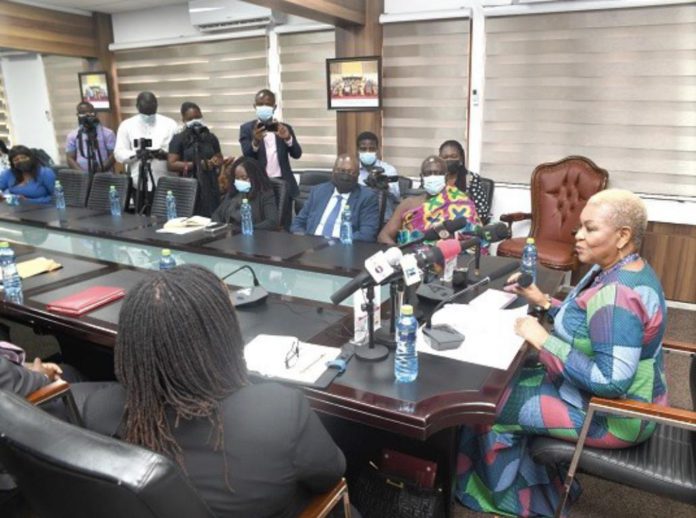 The Apiate Support Fund Committee has so far received GH¢23.4 million in cash donations from individuals and institutions since the fund was launched on January 25, this year.

The committee has also received donations in kind valued at about GH¢2.9 million comprising cement, wood and relief items from three organisations.

“These exclude the things that have been received in kind. For instance, GHACEM brought GH¢85 million worth of cement; the Forestry Commission donated wood valued at GH¢1 million, and Ghana Gas Company Limited also channelled GH¢1 million into relief items for the people of Apiate,” she said.

The Head of Marketing and Corporate Affairs of Stanbic Bank, Mr Mawuko Afadzinu, presented the cheque for the amount to Rev. Aryee, explaining that GH¢100,000 of that amount was meant to support the science, technology, engineering and mathematics (STEM) education for girls in the Apiate community.

Commenting on the disbursement of the fund, Rev. Aryee said the preoccupation of the committee was to invest the money that it had received so far in a financial instrument pending disbursements to the Apiate Reconstruction Committee for actual work to begin on the green community anticipated to be built at Apiate.

“The Appiatse Reconstruction Committee’s work will take a bit of time to start; so while we are waiting for them to come and tell us when and how much will be needed for their work, we cannot let the money sit idle. Even if they come to us, we cannot disburse all the money at a go, so it will be prudent to invest it,” she said.

Rev. Aryee observed that Stanbic Bank’s decision to invest GH¢100,000 into STEM education for females in the Apiate community was an innovative way of empowering girls beyond the physical rebuilding of the area.

She observed that STEM education was critical to nation-building for which reason she was excited that the focus was on females.

The chairperson said the initiative by Stanbic Bank aligned with the move by Vodafone Foundation to build an internet-smart school at Appiatse to support STEM education.

For his part, Mr Afadzinu stated that Stanbic Bank’s investment of GH¢100,000 in STEM education for girls’ education would give females in the Apiate community the opportunity to leverage technology for sustainable livelihoods.

“We have just done 24 hours after the International Women’s Day, which was on the theme: “Breaking the bias”. There is no other better way to break these biases than supporting the girl-child through STEM education,” he said.

He encouraged other institutions and organisations to commit some resources to promote STEM education for females, especially at Apiate.

Mr Afadzinu commended the Apiate Support Fund Committee for working diligently to mobilise funds for the reconstruction of Apiate.

He called on members of the public to demonstrate patriotism by contributing to the fund.

The government launched the Apiate Support Fund to help in the rebuilding of the community, as well as the rehabilitation of persons affected by the explosion that occurred in the community on January 20 this year.

The initiative is meant to mobilise funds from members of the public and institutions to reconstruct the Apiate community, which was completely destroyed.

Thirteen people died and many others sustained injuries when a truck carrying explosives from Maxam Ghana Limited, a company licensed by the Minerals Commission to transport explosives to the Chirano Gold Mines Limited through a subcontractor, Joyderk Co. Ltd, exploded.

Following the disaster, the government also set up the Apiate Reconstruction Committee, chaired by a Deputy Minister of Lands and Natural Resources, Mr Benito Owusu-Bio, to help rebuild the Apiate community into a smart and green model community for the country.

Parliament should stand up and assert its independence – Sammy Gyamfi