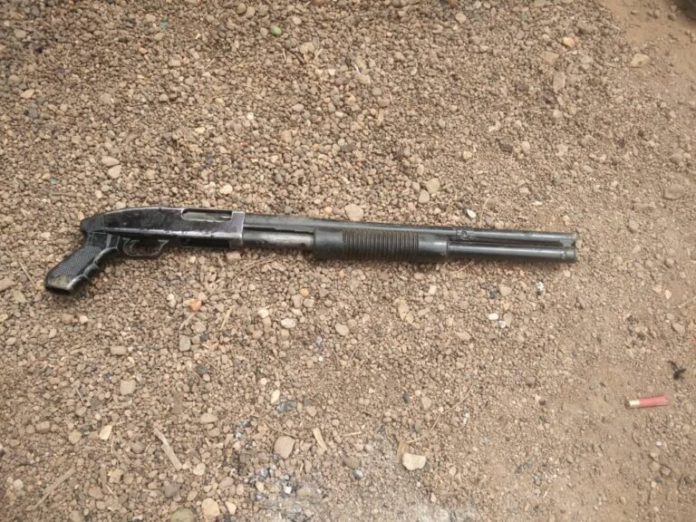 A 45-year-old man had been shot dead by unknown assailants at Akyem Twapease in the Kwaebibirem Municipality in the Eastern Region.

The deceased, who has been identified as Eric Twumasi, was shot in the head.

Narrating the incident, the Asuom District Command said on Saturday, March 12, 2022, at about 1:15 pm, a 63-year-old man, Kingsley Gyapong, a miner and resident of Tweapease, reported to the police.

He narrated in the morning around 10:00 am he saw a group of gun-wielding men who he identified as Ecolac, Simon, Kofi Emma, Abincolo, Ashaiman, and Kwasi Owusu firing pump action guns and locally manufactured pistols indiscriminately.

Twumasi was allegedly shot dead in the process with a pump-action gun.

The Police were quickly dispatched to the scene and met the body of Mr Twumasi in a pool of blood in a supine position under his corridor with his brain gushed out.

A pump-action gun was found in the compound with one used shell of 4 bore AAA Cartridge.

The body was conveyed to the Kade Government Hospital where Dr Nelson declared Twumasi dead.

The body has since been kept at the same hospital mortuary for preservation and autopsy.

Investigations have commenced but no arrest has been made yet.

The attack is being linked to a feud between two mining groups in the community.