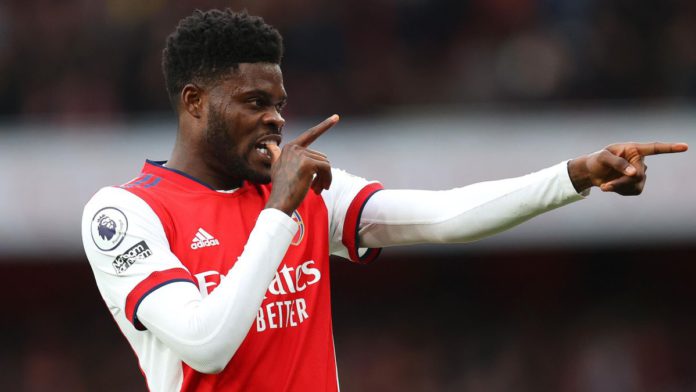 Arsenal continued their fine run of form and reclaimed fourth spot with a convincing 2-0 victory over Leicester at the Emirates in the Premier League on Sunday.

Goals from Thomas Partey and Alexandre Lacazette were enough to ensure the Gunners leapfrogged Manchester United into the top four, putting them back in control of the race for Champions League football next season.

Arsenal took the lead on 11 minutes when Partey headed home from Gabriel Martinelli’s corner. Leicester almost grabbed an equaliser but for Aaron Ramsdale whose wonderful acrobatic save denied Harvey Barnes, whose header was destined for the top corner.

The Gunners doubled their lead just before the hour mark.Caglar Soyuncu was penalised for handball in the box and Alexandre Lacazette converted expertly from 12 yards, picking out the top corner and leaving Schmeichel helpless.

Arteta’s men face a quick turnaround with Liverpool the visitors to the Emirates in the Premier League on Wednesday night. As for Leicester, they travel to Rennes for the second leg of their UEFA Europa Conference League tie on Thursday evening, where the Foxes will take a 2-0 aggregate lead.

Plaintiff to go for review on Deputy Speaker’s voting right