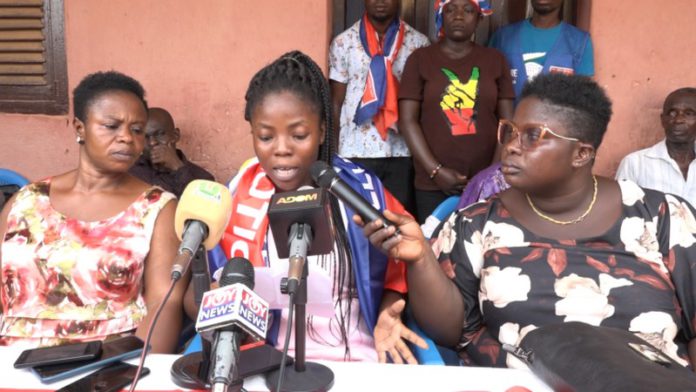 The youth wing of the New Patriotic Party (NPP) in the Tano North Constituency in the Ahafo Region has said it will resist any attempt by the Member of Parliament (MP) to reverse results of the polling station elections.

They claim the MP, Freda Akosua Prempeh, on a media tour in the Ahafo Region said she does not recognise the outcome of the elections which was chaired by the Municipal Chief Executive for Asunafo North, Osei Boahen.

According to the youth, the MP also allegedly said a different committee led by one Osei Boateng has organised another election across the constituency and will soon submit the compiled polling station album to the party’s National Headquarters in Accra.

But some members of the NPP in the constituency have dared her to name the polling stations where the polls were held to elect polling station officers by the said committee.

At a press conference on Friday, spokesperson for the youth, Gloria Kwartemaa Amponsah, stressed that majority of the party faithful are in support of the elections conducted, adding that any attempt to re-run or discredit it would be resisted.

“In their capacity as members of the party who followed the process from its beginning to the end, the official polling station elections have been held in the Tano North Constituency and competent executives have been elected.”

“We cannot, and do not want to engage in media banter with our Hon. MP, but we want to state categorically that all that she wants the whole world to hear and sympathize with her are false and a figment of her imagination.”

They, however, called on the party’s National Executive Committee to be firm and resolute to expose persons who wish to push their personal interests in the process.

“We are not preaching or prophesying doom or calamity to befall the party in Tano North, but if the national body follows the lies being spread around by our MP and take any unpopular decision based on that, then the NEC would have themselves to blame in the aftermath of what happens in the Constituency.

“An MP whose percentage electoral votes is roughly 9% adrift that of the presidential candidate should not be pampered to build an album to suit her just to win parliamentary primaries,” Gloria Amponsah added.

Some party members have accused their executives of hoarding the forms.

Currently, some party members in New Juaben North and Sunyani East have petitioned the court to seek an injunction on their respective polling station elections.

The General Secretary of the NPP, John Boadu, has urged party supporters to use laid down mechanisms to resolve their grievances.

He has warned that those who resort to violence and other anti-party behaviour will be expelled from the party.

It’s for my 3-week crusade