Groom crashed to death on his way to wedding reception 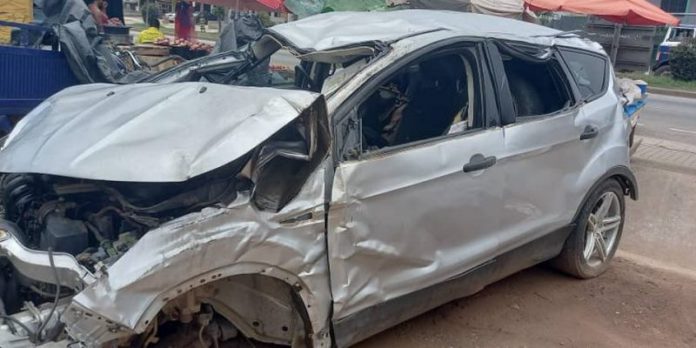 A 40-year-old man has crashed to death while en route to his wedding reception at Fumesua in the Ashanti Region.

The Sunday incident occurred after the marriage ceremony had been held that morning.

According to police, the groom, Mohammed Zakari Babangida, lost control over his Ford vehicle and consequently veered off his lane and landed into a ditch.

“It was an accident which involved a Ford Escape with registration number AS-3222-21. They were driving from Bomfa in Ejisu towards the Kumasi direction.

“Upon reaching Fumesua, a section of the road, the information we received indicated that the driver of the Ford Escape was over speeding so in the process, he lost control of the steering wheel and hit a nearby culvert, and landed into a ditch”, Ejisu District MTTD Commander narrated.

ASP Francis Mireku revealed that the groom, who was driving the vehicle, was in critical condition and rushed to the hospital but died shortly after.

The other four occupants sustained injuries and are responding to treatment.

Accra-based Citi News reports that the bride became unconscious following the news on Sunday but regained consciousness later that day.

Also, a sister to the deceased became unconscious for a while when the news broke.

Some relatives expressed shock about the development.

According to them, a groomsman was initially driving until the deceased took the wheel shortly before the accident.

The deceased has since been buried in line with Islamic customs.