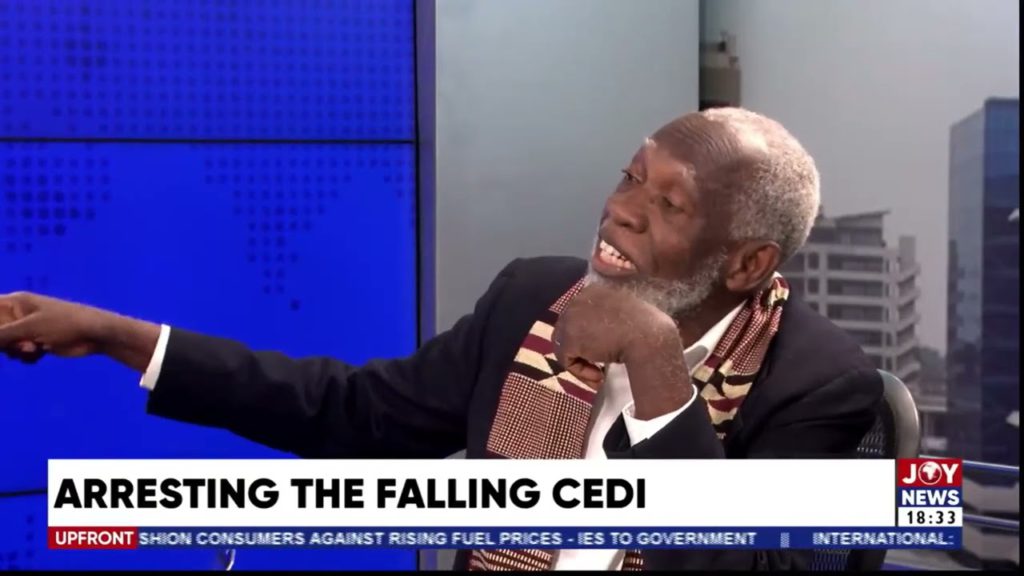 The Chairperson of the National Development Planning Commission, Professor Stephen Adei, has added his voice to calls for government to reduce its expenditure in order to improve on the performance of the economy.

According to him, the country is experiencing difficulties and to salvage the situation, a possible reduction in the earnings of government appointees and Article 71 office holders would help.

Prof Adei was speaking in an interview with Raymond Acquah on JoyNews’ UpFront on Wednesday.

In his opinion, a reduction in expenditure will help government in mobilising funds to address the pertinent developmental issues in the country.

“Why should a country like Ghana have about four or five ministries of transport? … It’s incredible. In other countries, we have one minister, and then we have technical heads of these institutions. So we can reduce the size of government … Actually, under this circumstance, I think that the executive and other things must have a pay cut; maybe 25% will do,” he stated.

He added that, if government does not consider a reduction in some of its expenditure, the economy may experience a further decline; which could lead to a worsening of the current situation.

In his view, given the current debt profile of government, there’s the need for government expenses to be minimised to help in the servicing of the outstanding debts.

“If you are exceeding your income, then you must accept to live below your income, which is the easy way, otherwise if you are earning GHC3,000 and you are in debt of GHC10,000 you cannot day to day spend GHC3,000. For you to get out of the rag you will have to cut your expenditure to GHC2,000 because you must service your debt. So we are in that situation as a country,” he said.

Prof. Adei added, “…And they [government] must thank God that this crisis has come now and not 2023, because if they don’t go for the hard one now, which normally will take about 18 months to go over this type of hunch, then they have a good chance by the middle of 2023 to see some good results in 2024. If not, things would get worse and they want to prevent being thrown out of government, they would be thrown out anyway.”

Touching on the general state of affairs in the country, Professor Stephen Adei also proposed a revision of the Free Senior High School policy. In his view, though the policy is a laudable initiative, government must take a second look at its implementation, with respect to the payment of fees.

“Free SHS is wonderful. Because if it was there, I would have gone to secondary school, not teachers college. But we have to look at it again. I think that there are certain schools, which we should make them autonomous and fee paying and people will go there, but then make sure that there are good community schools for everybody else,” he advised.

Meanwhile, Ghana’s current public debt stock stands at a staggering 341.8 billion Ghana cedis with a corresponding debt to GDP ratio of more than 77% as of September ending 2021.

This means if the country should share this amount across the country’s 30.8 million population, everyone will owe approximately 11,000 Ghana cedis.

In the first quarter of 2022, the government has indicated that it will borrow a total of GHS24.5 billion from the domestic market of which GHS20.7 billion will be used to service existing debt in the local market, leaving the government with just GHS3.8 billion to finance other expenses.

Some commercial drivers in Kumasi buy fuel on credit