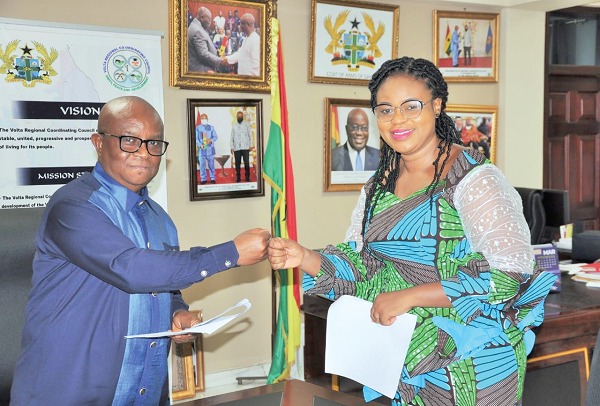 The newly confirmed Adaklu District Chief Executive (DCE), Juliana Kpedekpo, was on Tuesday sworn into office at a brief ceremony on the premises of the Volta Regional Coordinating Council (VRCC) in Ho.

It followed her overwhelming endorsement by the assembly last Monday at Adaklu-Waya on her second nomination by the President.

Seventeen of the 19 assembly members gave her the nod, with only two votes cast against her.

By that margin, the 35-year-old accountant, who was until her nomination by the President an official of the National Health Insurance Authority, won 89.5 per cent of the votes from the house.

The assembly had earlier rejected two men, each nominated twice by the President for the post.

Ms Kpedekpo, thus, becomes the first female DCE for Adaklu since the district was created in 2012.

The Volta Regional Minister, Dr Archibald Yao Letsa, who performed the swearing-in ceremony, took her through the oaths of office, allegiance and secrecy.

He reminded the DCE of her role as a servant of the entire district and entreated her to carry out her duties diligently without any form of persecution of perceived opponents.

“Your priority is to seek first the interest and well-being of the people of Adaklu and not any political party,” the minister added.

Dr Letsa pledged the VRCC’s support for Ms Kpedekpo in the discharge of her duties at all times.

The Presiding Member of the Adaklu District Assembly, Rev. Fred Agbogbo, said the confirmation of Ms Kpedekpo as DCE was a huge relief for the assembly, adding that the assembly was happy and ready to work with her to advance the development agenda of the area.

In her maiden speech as DCE, Ms Kpedekpo said building strong bonds of peace and unity within the assembly and also among the people of Adaklu for progress would be among her priorities.

“We will work as a team to ensure that the future generations become inheritors and not just survivors,” she added.

Premier League Round of 30 preview

Chelsea: Who are the potential bidders?