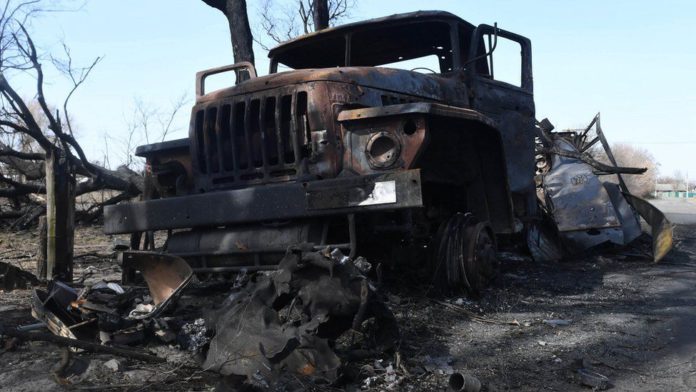 The governor of Ukraine’s Chernihiv region says there is no let-up in attacks by Russia, despite its pledge to reduce military activity there.

The governor, Viacheslav Chaus, told the BBC that he did not believe Russia’s promise.

“We’ve already seen that there wasn’t even a single time when their military forces kept their word,” he added.

Russian and Ukrainian negotiators made no “breakthroughs” in Tuesday’s peace talks, the Kremlin has said.

“What is positive is that the Ukrainian side has at least started to specifically formulating and putting on paper what it is proposing. Until now we had not managed to achieve that,” Kremlin spokesman Dmitry Peskov said.

“As regards the rest, we cannot, put it this way, at present state there have been any breakthroughs, anything very promising,” he said, adding that a lot of work was still to be done.

In Chernihiv and the surrounding area, “the entire night was pretty tense,” Mr Chaus told the BBC.

“They attacked Nizhyn and Chernihiv. Mostly Chernihiv. Again, part of the civilian infrastructure was destroyed.”

“Chernihiv still has no electricity, water supply and heat. It won’t be easy to restore this infrastructure. None of the military buildings were targeted last night. They kept attacking only civilian infrastructure,” the governor said.

The BBC has not been able to confirm this independently, but residents of Chernihiv also said the fighting was continuing.

“This night was rough,” one resident told the BBC. “We heard there was fighting all night in the suburbs, away from the city centre. We heard artillery. But there was no aviation tonight.”

Another resident said shelling was continuing on Wednesday, although not as intensely as overnight.

On Tuesday, Russia said it would cut back operations around Chernihiv and the capital, Kyiv, in an effort to “boost mutual trust” in the peace talks.

Kyiv’s deputy mayor, Mykola Povoroznyk, said the capital itself had not been shelled overnight, although gunfire had been heard from battles around the city.

US and Ukrainian officials say Russia is continuing to reposition forces away from Kyiv, probably as part of an effort to refocus on eastern regions.

Delegations from Moscow and Kyiv held three hours of discussions in Istanbul on Tuesday aimed at bringing to a close more than a month of fighting in Ukraine.

Ukraine said it had proposed to become a neutral state in exchange for security guarantees. A key aim of Russia’s invasion was to stop Ukraine joining the Nato alliance and Russian officials said the talks had moved to a practical stage.

Russia’s pledge to cut back military activity was met with scepticism. “Ukrainians are not naïve people,” President Volodymyr Zelensky said in an overnight video address.

Mr Zelensky said that initial signs from the peace talks were “positive”, but added that they did not “drown out” the explosions of Russian shells.

Other countries also reacted with caution. US President Joe Biden said: “I don’t read anything into it until I see what their actions are.”

Leaders from UK, France, Germany and Italy also urged the West not to drop its guard against Russia.