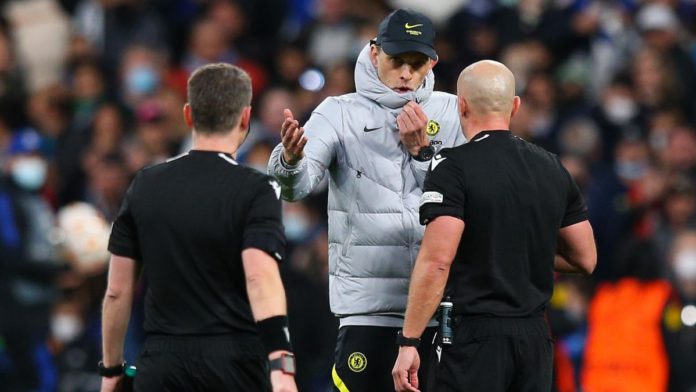 Chelsea boss Thomas Tuchel slammed the referee for “smiling and laughing loud” with his Real Madrid counterpart, Carlo Ancelotti, in the wake of his side’s Champions League exit.

The Blues narrowly missed out on a famous European comeback after recovering from a 3-1 first leg defeat to lead 3-0 in the Bernabeu with barely 10 minutes left on the clock.

But Rodrygo’s glorious strike sent the tie to extra time, where Karim Benzema’s header sealed a 5-4 aggregate win for Real.

Tuchel was full of praise for his side and said they “deserved to go through” before turning on referee Szymon Marciniak.

“I was disappointed that the referee had a good time with my colleague, with Carlo Ancelotti,” said Tuchel, who confronted the official after the match.

“I know that Carlo is a gentleman and a nice guy, but when I wanted to go and say, ‘thank you for the match’, I see him [Marciniak] smiling and laughing loud with the opponent’s coach.

“I think this is a very, very wrong time to do this, after the final whistle and 126 minutes, and one team giving their heart and fighting to the very last drop, and you go as a coach and see the referee smiling and laughing with the other coach.

“I think it’s very, very bad timing, and I told him this.”

Tuchel was aggrieved that Marcos Alonso’s goal in the 62nd minute was chalked out for the faintest of handballs by Marciniak based on guidance from VAR, rather than checking it himself on the pitchside monitor.

When asked about the official, the German said: “It’s not only today, it was like this in the first leg…

“Maybe I get problems [if I speak]. If you play against Real Madrid, you can maybe expect that not everybody has the courage.

“I told him I am super disappointed that he doesn’t come and check [the handball] on his own.

“You should stay the boss and not give the decision to someone sitting in a chair, isolated from the atmosphere. He should stay in charge and check it on his own and explain it better.

“I thought we deserved more minutes [added on] at the end. Maybe it is too much to ask for in matches like this against this opponent. Listen, we had it in our hands and we were not lucky enough.”

Goals from Mason Mount, Antonio Rudiger and Timo Werner had put the holders on the verge of a memorable triumph, only for Real to spark into life late on.

“Well we are very disappointed and very proud at the same time, because we played a fantastic match,” added Tuchel.

“We deserved what we had. We scored four goals, we had big chances, to score even more.

“But we were unlucky, that’s why we are disappointed. We got beaten by pure individual quality and conversion, offensive conversion of our mistakes.

“Unfortunately we had two mistakes after ball wins; the most crucial moment in games against Real Madrid.

“So in the end we were unlucky. We deserved to go through after this performance and after this match today, but it was not meant to be.

“And as you know, you need luck in games like this. It was not on our side.”