Boadu comes in on a three and half year deal and replaces Serbian coach Kosta Papic who resigned from the job after just two and a half months in charge.

He becomes the second coach the club has appointed in the 2020/2021 season following the demotion of Edward Nii Odoom at the beginning of the campaign. 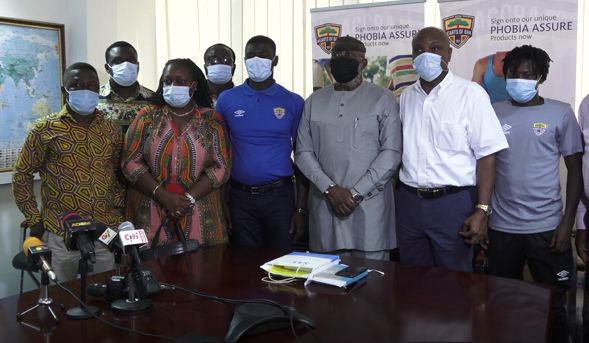 Speaking at the unveiling ceremony, Board Chairman and Patron of Accra Hearts of Oak, Togbe Afede XIV, said the club is confident Boadu is the right man for the job.

“Our commitment is to work with him for several many years, so we can achieve success together.” He said.

“His ambition is consistent with ours, we think we need someone like him and he has also confirmed his belief in the fact that he needs a club like Accra Hearts of Oak to give him the appropriate platform for realization of his objectives.

“So this I believe is a match made in heaven, a meeting of desires and we expect a mutually beneficiary relationship that will last several years.”

Samuel Boadu on his part said it has been a dream of his to coach the Ghana Premier League giants.

“I had been looking for this opportunity for quite long” He said.

“This is the time for me to be part of the Phobia family. I am proud to call myself the Head Coach of Accra Hearts of Oak.

Other Stories Global News Arena - June 24, 2021 0
The Prince of Wales continued to support the Duke and Duchess of Sussex with a "substantial sum" in the months after they stood...

Entertainment Global News Arena - June 24, 2021 0
- Advertisement - It was a combination of knowledge and articulation when Sammy Gyamfi and Kweku Baako Jnr came face to face on Metro...

Twum Barimah Takes On Ex-Prez Mahama On Cost Of His Travels As President, Files...

Twum Barimah Takes On Ex-Prez Mahama On Cost Of His Travels...