Another sitting Member of Parliament has lost his seat in a delayed primary of the ruling party which was held today in the Ashanti region.

Dr Samiu Nuamah lost his slot to Dr Kingsley Nyarko in the Kwadaso primaries which were held Wednesday afternoon.

The incumbent garnered 158 votes as against the victor’s 178. A third aspirant pulled 48 votes.

The MPs defeat brings the number of losing incumbents in the NPP primaries to 42.

Meanwhile, Political science lecturer at the University of Ghana Prof. Ransford Gyampo says the defeat of incumbent Members of Parliament at the primaries of the ruling New Patriotic Party is a good omen for parliamentary representation.

According to him, the situation will serve as a wake-up call for MPs who neglect their representative function.

He also noted that MPs who were protected by the party, hence went unopposed, would have also lost out if they were contested.

Prof Gyampo is of the view that MPs must be able to combine the responsibility towards their constituents with their lawmaking roles.

“But then, we are also saying that what has happened in a way is a good omen for parliamentary representation as in those who refused to protect the fiduciary trust that was reposed in them by the people. Those who refused to provide adequate mechanisms to boost representation have been taught a certain lesson that in my view is good,” he told host Regina Borley Bortey on Shaping the Nation show on Starr FM.

He stressed: “And I’m saying that if others had not been protected to go unopposed, they would have also fallen. So I think this is a lesson for the incoming ones and then those that have been protected, they should also sit up. And nothing in my view is going to be lost even if we have new people, nothing will be lost. if people are really smart and they want to learn, it’s a matter of weeks. Parliamentary practices can be google searched and you will just be able to be socialized and you will be able to make your mark on the floor of parliament.”

About 40 Members of Parliament lost their seats in the primaries of the ruling party which was held on Saturday, June 20. 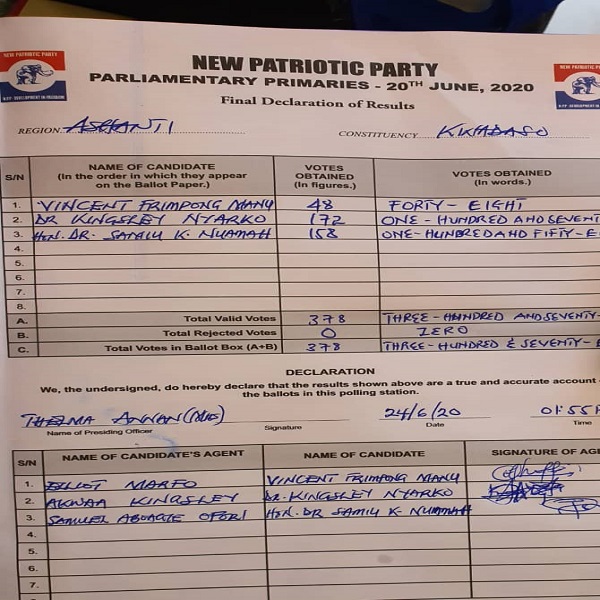 GTV Breakfast Show host, Mrs. Selikem Acolatse Apaloo has resigned from the Ghana Broadcasting Corporation (GBC) as she issues the below statement: “I wish to announce my resignation from the…